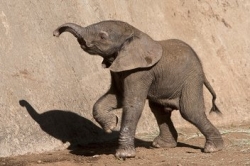 February 15, 2010 (San Pasqual) -- It was a wild stay for campers at the San Diego Zoo’s Wild Animal Park over the weekend. On Valentine’s morning, they were awakened by festive trumpeting of the park’s African elephant herd at around 2 a.m. when a calf was born.

The unnamed calf ‘s mother is Ndlulamitsi (Ndlula for short), which means “taller than trees” in the SiSwati language. The calf was born in the large elephant field in the presence of the entire herd, now made up of 13 elephants, including the calf’s father and Ndlula’s older offspring, Vus’musi.

“We have set up the care of the elephant herd to be as natural as possible, including during a birth,” said Randy Rieches, San Diego Zoo’s Wild Animal Park curator of mammals. “During an impending birth we keep a close eye on the cow and make sure she is in the company of at least one other elephant to provide her with support. In this case she surprised us and had the birth at little earlier than we expected, so she had the comfort of the entire herd, creating a very natural birth.”

At sunrise, the Roar & Snore campers were finally able to see why the elephants had been excited just a few hours earlier. The campers were the first to see the male calf, surrounded by his “aunties” and their calves.

When keepers arrived a short time, later they found the bull and Vus’musi, the herd’s oldest youngster at six years old, standing guard a short distance away, acting like a herd would do in the wild.

Rescued by the Wild Animal Park in August 2003, Ndlula and six other adult elephants were to be culled in Swaziland’s Big Game Parks because of elephant overpopulation. Lack of space and long periods of drought created unsuitable habitat for a large elephant population in the small southern African country.

At the San Diego Zoo and the San Diego Zoo’s Wild Animal Park, elephant studies are underway on topics ranging from nutrition to bioacoustic communication. In Africa, the Zoo has a researcher studying human-elephant conflicts as well as habitat range and use. In 2004, the Zoo committed to contributing $30,000 yearly to Swaziland’s Big Game Parks though 2014 to fund anti-poaching patrols, improved infrastructure and purchase of additional acreage for big game parks. The Zoo supports other elephant conservation projects through donations to the International Elephant Foundation.

For more info on the Wild Animal Park, and additional photos, see http://www.sandiegozoo.org.

I love the San Diego Wild Animal Park! So much there to see -- this cute baby elephant just adds to the thrills. I'd love to do one of these camping nights there.