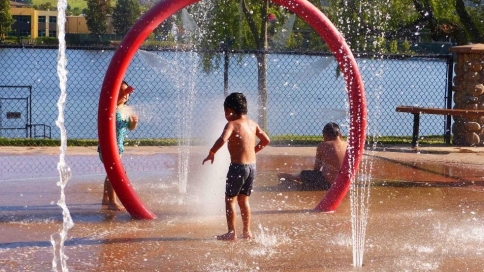 By Miriam Raftery
Photo: Kids frolic in a spray park at Santee Lakes
February 16, 2021 (El Cajon) -- Children in El Cajon may soon have a water feature to play in and enjoy. The City has approved asking staff to come back with proposals and possible funding sources to add a water feature, such as a splashpad or other cost-effective water feature, to Wells Park.

The city has many children from low-income households with only limited access to recreational facilities, so Councilman Gary Kendrick wants to provide a fun way to help kids cool off on those hot summer days.

“I grew up in Santee and we didn’t have air conditioning until I was 14,” Kendrick says.  “Summer heat, like in El Cajon, could be brutal so we would set up a sprinkler and had a great time running through it in the front yard.  But we have a lot of children who live in apartments on the valley floor who don’t have front yards. This would be our gift to the children of  El Cajon.”
The proposal by Councilman Kendrick passed the City Council unanimously But whether it will win final approval, and just how elaborate any future water feature could be, will likely depend on finding funding, such as through grants or a donation from a local service club.