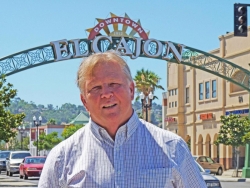 A former El Cajon Citizen of the Year who worked for the City transportation department for nearly 30 years, he’s also headed up the San Diego East County Chamber of Commerce leadership program. He's a U.S. Army veteran who believes in public service and has volunteered for the El Cajon Community Development Council (CDC), El Cajon Rotary, Elks 1812 lodge, Home of the Guiding Hands and the El Cajon Animal Shelter. He chaired the East County Toy Drive, serves as Santa Claus, and won the “Stoney” award for community service to help children.

Now he's beating the drum for change -- and brimming with ideas to revitalize El Cajon.

He is concerned about rising vacancies and boarded up businesses downtown and elsewhere. He also expressed concerns that “our police staffing is at an all time low…What we have is three policemen in the City at the same time. We have to meet our Fire Department needs, too. This is life and death.” 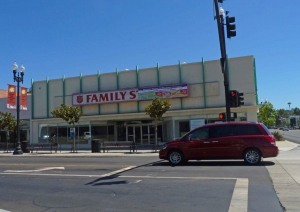 Strolling down Main Street, he expressed many fresh ideas. “The greatest thing in the world would be a new International Friendship Festival, with permanent museums,” he said, citing El Cajon’s increasingly diverse population including many Chaldeans from Iraq. “On the corner, where the Salvation Army building (now empty) is, my vision is a farmer’s market with roll-up windows and doors. It could sell flowers and fresh produce, like a giant flea market, with small booths and boutiques inside.” He cite a similar market in Seattle as an example.

“When the City recruited businesses here, the East County Performing Arts Center was a promise to draw in customers to downtown. Then they pulled the rug out,” said Macomber, noting that many small business owners downtown have their life savings invested and that they City should have been able to predict maintenance needs for the theater, which is currently closed down pending major renovations. He believes it’s time to do something positive with the theater. “Let’s be creative, get back to having big name acts,” he said. “The change in management last time around was a joke, and the subsidies did not subsidize.”

Macomber wants to see a Trader Joe’s on the ground floor of the El Cajon Community Development Council (CDC) building. “They have more space than they need,” he said, noting that condos were approved and built downtown but there is no place within walking distance to buy groceries.

“The CDC building has a basement,”added Macomber, who wants to bring more nightlight to downtown. “It could make a good speakeasy.” 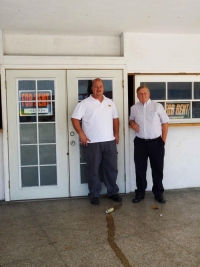 He has held brainstorming sessions with his friend, Todd Moore, who is running for Mayor. “We want to put a restaurant on the top floor of the County building. Now it’s just storage. We could call it the Jailhouse Rock Café; there’s a holding cell in the basement. We need winetasting in different locations downtown; how about an El Cajon wine bar?”

Macomber recalls an era when downtown was “the place to go for everything” before Parkway Plaza was built. “there aws Longs Clothiers at Main and Magnolia, JC Penney with an escalator…Woolworths with a full lunch counter,” he said.

Since then, large new buildings have been approved without adequate parking. “Now the same people who gave away the property at the southwest corner of Main and Magnolia and approved the new buildings with substandard parking want to tear down the building across the street and erect a parking structure at the taxpayers’ expense,” he said.

He has ideas for capitalizing on the new highway 67 Bradley over-change coming to El Cajon near Gillespie Field. “That’s huge,” he said, recalling his days in the City’s transportation department when the Highway 125-67 interchange was completed. “The airport will just takeoff; big trucks can deliver goods straight away…The area at the west end, across Cuyamaca, is ready to develop.”

He originally wanted to build a hotel near the airport, but learned that Federal Aviation Administration restrictions would not allow it. So he’s looking at alternative locations. “The old Kaiser site on Travelodge would be a great place for a convention center,” he added, noting that could bring business to El Cajon that is currently lost to Mission Valley or downtown.

“They’ve spent a lot of time on downtown but they are neglecting Jamacha, the Washington corridor, El Cajon Boulevard and other areas, he said. “This is a nucleus downtown, but the rest are taxpayers, too.”

He cited examples of small businesses “put through the wringer” over a long time to open a business. For example, he said New York Bakery had to pay a huge amount to improve an alley. “Why not use redevelopment money up front?” 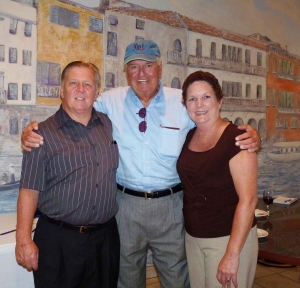 Macomber asked. “We lose so many businesses.”

Macomber criticized the current council for “questionable deals, cronyism and special interest groups receiving special treatment at the expense of the community. This has been going on for many years,” he said, “and we just change it by not allowing it to continue.”

A registered Independent, Macomber believes in “finding the good and following it, not blindly following an allegiance to a political party.”

On some issues, he sounds staunchly conservative. Once a supporter of Prop J to prevent police and firefighting cuts, he says in hindsight he believes the City lost business as consumers took their shopping dollars elsewhere. Now, he suggests, “Let’s drop our sales tax to the lowest in the County; I think we could make up the difference…If we lowered taxes, people would come here in droves to buy a BMW.”

On other issues, he takes a humanitarian stance that emphasizes taking responsibility. Asked about homeless and the City’s poverty rate, highest in San Diego County, he replied, “These people are part of our society and we need to address the problems. It can’t be `not in my backyard.’” On his website, he elaborated. “We must expand on existing programs and develop new collaborative programs to help tackle the real issues: drugs, joblessness, and mental illness.”

An ordained minister, Macomber’s plan would include outreach to the faith-based community. He praised the Set Free Ministries program as an example of a private organization stepping forward to help people in need in East County. Asked about separation of church and state issues that have arisen during some council sessions, he replied, “The division between church and state is a fine line…A moment of silence is perfect; to vary from this is wrong.”

Noting that police officers are working overtime now that the City is down to just three officers at one time, he asked, “How much are we really saving?” He noted that the City has a large senior citizens patrol—and suggested that they be allowed to issue parking tickets, something the current Council has not allowed. “Public staffing is down 21 percent,” he added. “Chief Pat Sprecko is doing an amazing job with what he has, but at some point, police response time is going to go down.”

He took a jab at incumbent Councilman Gary Kendrick. “Kendrick was the champion of the no-smoking ordinance in El Cajon, but who will address that?” he said, noting that the ordinance is not enforced due to lack of police manpower.

As a past city employee, he believes employees deserve a fair “shake”, recalling that he went years without a pay raise. Macomber worked for the city for nearly three decades, until an accident led him to take medical retirement. Struck by a vehicle, he has made a strong recovery – limping only slightly as he traverses El Cajon, making a list of improvements needed ranging from cleaning up trash to bringing in new businesses.

He also wants to form partnerships to convert city buildings to solar energy, saving on utility bills. “We have greenbelts, but they are not reachable or buildable,” he said, adding that some would be great places for solar. 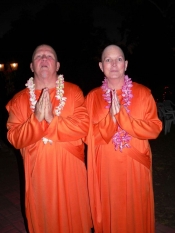 The man who enjoys playing Santa is also known for his warmth and humor. When his wife lost her hair from chemotherapy during cancer treatments, Macomber shaved his own head and donned an orange robe for a Halloween party which the Christian minister and his wife couple hosted, masquerading as Hare Krishnas.  His wife, Jane Moore, is also active in local charitable organizations.

A routine background check on Macomber turned up no records of concern.

Macomber’s candidacy began as a prank staged by a friend, who posted a website to recruit Macomber to run for mayor. But when his friend, Todd Moore, filed candidacy papers for the mayoral race, Macomber decided to run for Council – and is taking the campaign seriously.

Macomber is one of four candidates running for the El Cajon Council. The others are incumbent Councilman Gary Kendrick as well as challengers Duane Swainston and Anthony Chuisano.  ECM has previously profiled two of these candidates; Chuisano did not respond to requests for an interview.