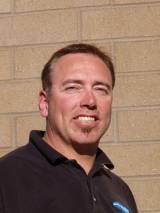 October 6, 2010 (El Cajon ) – “We need to think outside the box,” El Cajon City Council candidate Duane Swainston said at a candidate forum sponsored by the League of Women Voters this week, “even though we’re in El Cajon, which is `the box’,” he quipped noting the Spanish meaning of the City’s name.

In an interview with East County Magazine, Swainston elaborated on his views. Recent redevelopment in downtown El Cajon has been a good thing, he noted, “but you still need the businesses in El Cajon….You’re basically dressing up the box, but without anything inside, it’s an empty present. I want to add value to it and make it a real present—bring a smile to the faces of the folks who live here.”

Swainston has lived in East County for 30 years, including 20 years in El Cajon. A manufacturing supervisor for GKN Aerospace and formerly, Chemtronics, he believes his business background will serve him well. “I know how to make the hard choices for the budget,” he said, adding that he is a conservative Republican running in the nonpartisan race.

At the debate, Swainston said he believes he voted for Prop J, the ballot measure that increased the sales tax by a half cent—a measure that Mayor Mark Lewis has said brought in $7 million and prevented cuts in 20 police, fire and paramedic positions. But Swainston said he now believes passing Prop J was a mistake that’s driven some consumers to go to neighboring cities to make purchases. “Prop J has been used as a crutch; they don’t have to come up with new ways to improve the budget.” He now wants to repeal Prop J. 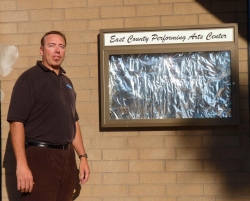 He wants to “bring a customer base back into El Cajon.” Elaborating, he said, “There needs to be something that draws people to El Cajon. One is the performing arts center which is sitting vacant. Even when it was operating, it was in the red. We need to renovate it to make a multi-use facility…keeping it as large as it is, but maybe having modular seating to move out of the way to make it more multi-functional.” He favors management of the theater by an outside group and says he would approach one of the tribes, such as Viejas or Sycuan, to sponsor concerts or provide a corporate sponsorship.

He wants to bring in “some kind of big business” to El Cajon, such as an outdoor superstore like Cabela’s or Sportsman’s Warehouse. He praised efforts by Council to bring a brewery downtown but added that he wants to see local restaurants support the new brewery by including some of the local beers on tap. He expressed appreciation for the influx of Chaldean refugees and immigrants. “They bring in new business and new opportunities; I think they are being a vital part of contributing to El Cajon right now,” he said at the candidate forum. He also wants to broaden the Broadway redevelopment area and suggests a winter festival with an ice rink to draw people into El Cajon during the holiday season.

How would he fund his ideas to boost business while also cutting the sales tax? “There are things I’d need to look at when I get into office, budget cuts perhaps, and I’d have to look at current fees. It’s all about bringing busineses to El Cajon and improving businesses for those that are here to increase that revenue,” he said. 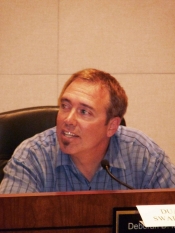 At the candidate forum, he offered another option. “One way is to privatize things,” he said, suggesting that some government services should be outsourced. He also said he would favor changes in the city’s pension system for city employees and potentially cuts in some salaries, such as the city manager.

Asked his approach to the homeless problem, he conceded, “I’ve not been really involved in that, so I really can’t speak on that topic.”

He favors more red light cameras to “let police be other places” where crimes occur. “People know if they violate the law, there are consequences.”

Married for 21 years and a member of the Foothills Church, he has two children who recently graduated from Grossmont High School and Foothills Christian Academy. Asked how he feels about separation of church and state, he said it “depends on each of the issues.”

A routine background check of county and court records turned up no records for Duane Swainston.

Swainston said this is his first time running for public office. “I’ve had political aspirations, and I thought a good place to begin is the city I live in,” he said. “I thought I could make a positive change.”

To learn more about his candidacy, visit www.dswainston4council.weebly.com.

He is one of four candidates running for the El Cajon Council. The others are incumbent Councilman Gary Kendrick, Drum Macomber, and Anthony Chuisano.  Read ECM's profile of Macomber .  Watch for ECM profiles of the remaining candidates soon.

Nice article but I do have a website. www.dswainston4council.weebly.com and I am still employeed by GKN.

Glad to hear you've added a website since our interview. I've added the link to the story, and also clarified that you're still with GKN.