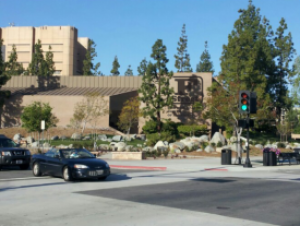 April 1, 2013 (El Cajon ) -- In a joint statement released  Friday by the City of El Cajon and San Diego-based F Street Corporation, the chain of locally-owned adult bookstores revealed that it has reached a definitive agreement to purchase naming rights for the troubled East County Performing Arts Center (ECPAC) in downtown El Cajon.

The deal spans a 10-year period starting in June, East County Magazine has learned, with right of first refusal to renew the deal in 2024. The theater will be renamed “The F Street Performing Arts Center of El Cajon.”  F St Bookstore has vacated its premises on Main Street in order to expand into its new headquarters in the performing arts center.

The Rock Church (which recently broke ground on a new worship center on Jackman Street near Parkway Plaza) had been in initial negotiations to take over the 1,400 seat theater’s management.  The Rock Church proposal also included acquisition of the El Cajon Police and Fire Departments for promotional purposes.

But Bob McClellan, senior member of the El Cajon City Council, said that the F Street Corporation’s proposal to manage the theater, which included naming rights, was superior to The Rock Church’s plan.

“Everybody, including the City Attorney, said that another association with a conservative religious organization would once again raise concerns about separation of church and state.  After consulting with Ray Lutz’s Citizens Oversight Project, a group whose opinions we really respect, we determined that a deal with F Street was one way to allay and address such concerns. I could even see us presenting pay-per-view programming provided by F Street on El Cajon’s Government channel as yet another revenue enhancement opportunity.”

Developer Daryl Priest, speaking on behalf of the downtown Promenade District merchants’ association,  also praised the plan, which hearkens back to the City's entertaining history during the Pussycat Theater era.

“What really made F Street’s proposal stand up and out are their plans to feature gay-oriented “Dreamgirls” drag shows at the theater on Friday and Saturday nights. These shows will showcase a groundbreaking new commitment in East County for diversity and LGBT rights,” Priest said. “So many people around San Diego County associate El Cajon with the summer car show, our big box Christian ministries, and the Mother Goose Parade.” This level of inclusiveness toward alternative lifestyles could be a source of major economic development to El Cajon and pose major competition for the entertainment venues geared towards the gay community in Hillcrest, the savvy business entrepreneur added.

On Sunday mornings, a newly-established Metropolitan Community Church (MCC) congregation will occupy the theater for its LGBT-friendly church services.  F Street also said it would reach out to  area churches  to provide worship services to the gay leather, fetish and bondage communities.

As a part an expanded concession area, F Street will open a mini-boutique with adult books, videos, and paraphernalia in the lobby of the theater during shows, in a 21-and-up section of the gift shop.

After it has completed  renovations of the theater, F Street expects to introduce a proposal to the El Cajon City Council for a partnership with local developer Neal Arthur to develop a multi-story 200-room bath house and massage facility adjacent to the theater on Rea Street.  It also envisions opening an adult arcade supercenter featuring peep shows at the street corner location formerly occupied by The Salvation Army on Main Street and Magnolia.

“We see so many opportunities to serve our loyal customers with this unique partnership,” said F Street’s spokesperson, who declined to be identified.

El Cajon Mayor Mark Lewis, in an exclusive interview with ECM, said that the money generated will ensure the future success and development of the downtown area. Tax revenues will put the city coffers back in the black, averting any future revenue shortfalls and even bankruptcy.

The Mayor also said that the new adult entertainment venues will bring a whole new meaning to the concept of “red light cameras” in downtown El Cajon.

Lewis also revealed that the former SaveECPAC group will play a major role in the official reopening of the theater which has been shuttered for over three years. “I know that they are in discussions with the Grossmont College Theater Department and Christian Community Theater to present a special gala performance of the popular play, Last of the Red Hot Lovers.” CYT is reportedly holding out, however, for a management contract to produce outdoor summer shows in a new "Starlight Magnolia" pavilion.

In addition, former El Cajon City Council member Jillian Hanson-Cox will present a congratulatory message on the theater’s new Jumbotron video display via a special Skype connection from the minimum security federal prison camp facility in Arizona, where she is serving her 30-month sentence for embezzlement from her former employer.

“We are very excited at the impact this new relationship with F Street will have on El Cajon’s future,” Mayor Lewis concluded said, citing the city’s recently unveiled slogan in connection with its year-long centennial. “We truly think this brings a whole new meaning to El Cajon being the “Valley Of Opportunity.”