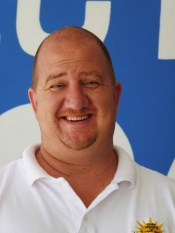 Public safety is a priority for Moore. “We can not allow our community services to be decimated,” his website states, noting that the Police Department is down 21% in staffing and the Fire Department is facing station closures. “With the passing of Prop J we were told that emergency services would not be cut.” 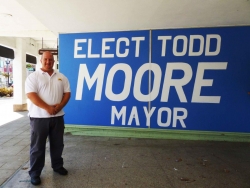 Moore said a group of business people, police and friends asked him to run for mayor. He and his wife of 19 years, Theresa, raised their four children here. Moore says he has in-depth knowledge of the City and its workings. He’s also been an active community volunteer including Communities Against Substance Abuse (CASA), AYSO soccer, and Christian Youth Theater.

Despite his CYT ties, he is not in favor of having CYT manage the troubled East County Performing Arts Center—and believes the City has been wrong to insist that the theater be self-sustaining, given that other cities with similar-sized theaters provide some financial support. “Without doubt, I’m going to fund the theater, up and running with professional management,” Moore pledged. “I also see a need for a smaller-sized community theater that seats 600 to 700 people.”

Strolling down Main Street with Moore, he pointed out other areas where his philosophy differs from the current City leadership. “The Prescott Promenade remodel took a lot of their focus,” he said. “It was a waste of $1.3 million. They took out mature trees and the circular raised area, but it still needs a stage. They said this remodel would get rid of the homeless, but they’re stil here,” he said, pointing to a homeless man sprawled out on the ground nearby.

He believes that money spent on Prescott Promenande would have been better spent on the theater. “The last thing we need to do is shut down ECPAC for any period of time.” 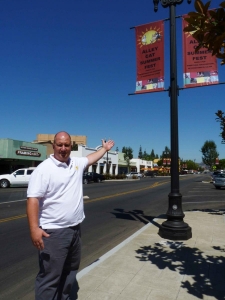 He wants the City to have more community festivals and provide more ways for people to enjoy El Cajon.  "I'd like to see more of this," he said, pointing to  signage for the Alley Cats Arts Festival, a new addition this year.

He also believes the City needs to do more to promote the festivals already held in El Cajon. Take the Western Heritage Days sponsored by the Olaf Wieghorst Museum, for instance. “There was no proclamation. There was no support,” he said. “Why aren’t we doing these activities in others as well as downtown, to draw people to other areas, too?”

He wants to encourage business growth in the community and new business opportuinties by “not playing favorites,” his website states. He pledges to manage tax money with integrity and be sure taxpayer money is spent for its intended uses, and promises to balance the budget and not spend more than is taken in.

“We’ve got to lower taxes,” he told East County Magazine. He believes Proposition J, which increased the sales tax, has proven a mistake with gains offset by losses due to people leaving the City to make major purchase. He believes lowering the sales tax would increase business for merchants and raise revenues.

He supports downtown revitalization but also wants to include revitalization of East Main and other areas. “Second Street is the second most traveled roadway, but it’s been neglected,” he said,” and what have they done to support Fletcher Parkway?” He also wants to see redevelopment around the Gillespie Field airport area, which he termed “desolate.”

Moore believes City government is “a bit top heavy with pensions encumbering the City” and says he is willing to explore a tiered system for new employees. But the former El Cajon employee added, “We do need to take care of people who have put in thirty years; you do not go into working for the City to get rich, but if you’ve served the City well, you should be able to be comfortable.”

Moore believes the City is losing business to Mission Valley and downtown San Diego. “Why not create a convention and conference center?” he asked, adding that he would oppose converting ECPAC to those uses, but instead would hope to build a convention and conference center elsewhere in the city. “El Cajon is the hub and the next of the entire East County,” he added.

He wants to foster more cultural activities in El Cajon. ”Why not have a cultural awareness weekend?” he asked, adding that the City could work with transit officials and other cities, also pursuing grant funding for arts programs. “Imagine the perception of El Cajon if people got off the trolley and there was an artist set up there, or a dancer. People want culture. The City needs a shot in the arm—some fresh energy.”

Moore, who wrote a grant for the Police Department that got equipment and overtime paid for, added, “We asked, almost begged the City to renew it and the City didn’t bother to write the grant.” He wants to see a part-time person dedicated to helping write grants, moving to a more proactive position.

On law enforcement, he expressed concern that the reserve force has “dropped to next to nothing.” He hopes to get citizen volunteers involved in more areas, such as parks and recreation. He is deeply concerned that public staffing is down 21%. “They say `attrition.’ Pat Sprecko (Chief of Police) is doing an amazing job with what he has, but a some point the response time is going to go down.”

The former law enforcement officer suspects crime rates are higher than reported, noting that cities can fudge the numbers; for example Oakland stopped taking reports of certain types of theft and rates naturally dropped. He is also concerned about long-term burnout for police and fire officials working long hours.

Moore considers himself a conservative Republican, but added, I can make my own decisions.” He is pro-life but would support exceptions for rape, incest and life of the mother. But he doesn’t believe his personal views should influence his official decisions. Asked his opinion about Supervisor Horn using taxpayer money to fund a right-to-life group, Moore replied, “It’s inappropriate to me when you are dealing with taxpayer funds.” A Christian and member of Journey Church, Moore faulted the Council and said that “sometimes they pander to churches.”

He wants to see El Cajon do more to promote solar energy. “This town has nothing but sunshine. [Supervisor] Dianne Jacob has a solar program. Why haven’t we joined? We could probably produce enough to feed back into the grid…They should have been involved a long time ago, and got citizens involved.”

He believes in increasing vitalizing by allowing business owners to be “enterprising and creative, then get out of the way.”

On Main Street downtown, he points to boarded up store fronts and says many have left because they ran into too many encumbrances. “It’s very much been a good old boy system. It’s time for that to change.”

He wants to form councils with revolving members, such as a business council, a cultural council, and a clergy council; these would serve as liaisons to the Council and help foster new ideas.

A clergy council might help address homelessness issues, for example. Besides faith-based help, he would like to see assistance from the police department psych team. Not have a shelter in East County isn’t keeping the problems of homelessness away, he acknowledged. “It’s already here.”

ECM conducts routine background checks on candidates. Moore’s came up clear with one exception: a battery case filed against the City of El Cajon and Moore when he was a police officer. Asked about the case, Moore said it stemmed from an individual with underlying medical issues. He said he believed the City settled the case but was uncertain of details. [ECM will request court documents to confirm the case outcome.] 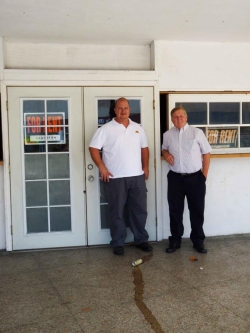 “I am about doing what’s best and wisest for this community,” the veteran police officer concluded.

I have a confession: I did not spend as much time researching and learning about the candidates and issues in this year's election as I normally do.

Thank you for putting my mind at ease. Despite Mr. Moore's involvement with his church, I feel I can trust him. I made the right choice.

I had an opportunity to attend a forum where the current mayor and Mr. Moore were answering questions posed by a mediator. El Cajon's current mayor, Mark Lewis, gave the strangest answers to questions asked. For example, he blamed the closure of Ralphs on Second Street's because of poor customer service. The mayor has no clue about what is happening in El Cajon. He has proven time and time again that he is not a leader. Todd Moore was eloquent in his responses and it was obvious that he is in touch with El Cajon and it's issues. He has a proven track record of ethical, honest leadership. If I lived in El Cajon, he'd have my vote!

Thank you for posting a very intouch article about the candidate and his views! His passion for community and integrity in service are truly unmatched!