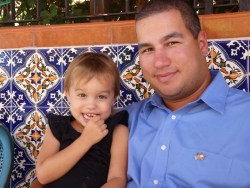 October 5, 2010 (El Cajon ) – John “Mike” Garcia joined the Marine Corps at 17 and served two deployments with the U.S. Marine Corps in Iraq, where he was wounded in the battle of Fallujah. After suffering a brain injury, he spent a year and a half in Balboa Naval Medical Center, the young sergeant took medical retirement. He became involved with the Warrior Foundation, helping wounded military personnel transition into civilian life. Now he is running for Mayor in El Cajon, hoping to apply his leadership skills to city government.

“I would do it again,” he says of his military service. “I love this country. This is my version of continuing to serve my country."

Garcia says he doesn’t want to be a career politician and has pledged to serve only two terms. “When people get into office, some of them totally lose touch with the people,” he told East County Magazine. “I’m running to represent the people.”

He considers himself a conservative on fiscal issues. “I love low taxes. I’m all about small government,” said Garcia, who wants to put an initiative on the ballot to repeal the sales tax hike previously approved by voters.  He believes El Cajon’s elected officials haven’t listened to voters on taxes.

The initiative that increased the sales tax was put to voters “as an ultimatum,” he said, adding that voters were persuaded that they would lose public services if the measure didn’t pass. “They thought it would augment police and fire,” said Garcia, who faults the City for spending money on a new police station. “I’d rather have officers well equipped instead of having a new building.”

Mayor Lewis stated in last night's debate, which Garcia was unable to attend, that the sales tax initiative prevented the layoff of as many as 20 police officers, firefighters and paramedics in the City.

Garcia said he has a special place in his heart for first responders. He does not agree with the Mayor and Council’s decision to increase employee pension contributions and reduce retirement age for police officers. “The ones over 55 are being forced to retire, cut off at the knees; they can’t get their full pensions ,” he said. He fears the city will lose experienced police officers and be forced to recruit younger, less experienced officers and train them “which costs money, and they have less self control, they’re more gung-ho, so we are more apt to have lawsuits.”

He voiced concern over businesses leaving El Cajon. “In downtown alone, we see nothing but vacancies and it’s all over,” he said, adding that he believes the city’s treatment of small businesses is “grotesque. They are the backbone of this City; to not give them a helping hand when they need it is a mistake. If they are struggling, subsidize their taxes for the first year.” He cited a case of Jamacha Bar & Grill, which he said sought a license for live entertainment, only to be asked for a hefty consideration fee and multiple requirements from space changes to number of pool tables. “Where I’m from in New York City, that’s called a shakedown,” Garcia said.

He criticized the City’s handling of the East County Performing Arts Center as well. “The performing arts center is phenomenal,” he said. “The problem is they don’t have people with proper experience to run it. I wouldn’t take an infantryman and put him in a medical field for triage. This is not about favors for friends; there are too many hands in the cookie jar.” He added that the City’s reluctance to subsidize the theater is “not realistic.”

Asked how he might have found funds to pay for subsidizing the theater, he cited two examples.

“They are giving money to private vendors with city funds to operate a brewery, but he (Mayor Lewis) won’t put money in the theater,” Garcia said.

In addition, he called for drastic cuts in other services. “Get rid of social programs. If we can afford to pour money into illegal aliens of all kinds…then we can help fund a theater. I’m Hispanic. I bleed red, white and blue,” said Garcia, adding that his ancestors came here legally. “We are not racist, but we can’t give money to everybody.”

He noted that El Cajon faces challenges from a growing community of immigrants including many Iraqi Chaldeans, adding that some face adjustment issues adapting to American culture. “I think starting a new life is phenomenal but they don’t quite understand our laws,” he said, noting that there are also cultural differences, such as Iraq’s male-dominated society. “But once they adapt they are okay. I have some Chaldean friends; they are phenomenal people, hard-working.”

He pledged to keep a stable line of communications open to the Chaldean community and suggested that more job placement is needed. “We can’t blame it all on the recession,” he added. “In the Marine Crops, they told us there is no problem that doesn’t have a solution.”

Garcia had planned to be in the military for “the rest of my life” and has shouldered weighty responsibility. “I lost friends,” he recalled, then described issuing an order as an acting platoon leader for a friend to go get a sandbag. “A mortar came down in front of him,” he said, his voice dropping. “I had some of his bone shrapnel hit me as well but there was no time to grieve, reacting to the fire fight. You become desensitized,” he said, then added, “but I grew from that.”

Then came Fallujah. Garcia was wounded seven times, most seriously on November 10, 2004. While defending his position in the rear, he recalled, “I saw a mortar flash. It killed one Marine who was taking a nap. I’m actually proud that I got to kill those guys and eliminate that threat,” he said. But while strafing with a machine gun, he had a 180 mm mortar exploded 25 meters away, he recalled. A Kevlar helmet pulled down to the rim of his glasses, due to rain, likely saved his life.

“I got hit in the head by shrapnel from the mortar…I blacked out, and came to the next day. My brain swelled up. There’s an indefinite problem with the frontal lobe. I’m sensitive to light, have some memory problems. It’s difficult; I can be irritable when multiple people talk.” He received a Purple Heart for his injury under fire.

He has fought to overcome his disability, however, and now teaches anti-terrorism to U.S. Military personnel, he said. He remains an inactive Reserve member. “They can call me back,” he said.

Garcia met up with his former girlfriend after returning to the U.S. He moved to El Cajon five years ago, married, and now has a three-year-old daughter. His wife, Courtney, is expecting their second child. Garcia has also taken courses online through the University of Phoenix and hopes to obtain a law degree.

Although he considers himself a conservative on most issues, his life experiences have led him to support personal liberties on issues such as abortion and gay marriage. “It’s hypocritical to tell someone you are free and them tell them what to do with your life on personal liberties,” he said. He added that he’s seen forced abortions, which are wrong, but also believes that if a woman is pregnant through circumstances such as rape, she should have a choice of options. He also supports separation of church and state, he said.

On his website, he cites a report indicating that, even $7 million projected from the sales tax measure will not be enough to close the City’s deficit this year. “Our City is in trouble,” he states on his site. “I’m a fiercely proud El Cajon resident. I love this City!”

But he adds, “The efforts of the existing City government, while noble, aren’t enough to make this good City a great one. For that to happen, City Council needs a fresh perspective,” he concludes.

For more on Garcia’s candidacy, visit his website at www.mikeformayor2010.com.

Garcia is one of five candidates running for Mayor; the others are incumbent Mayor Mark Lewis and challengers Todd Moore, Johnney Minarick, and Darrin Mroz. ECM has previously profiled Moore and Minarick in parts 1 and 2 of our "Spotlight El Cajon series:

Watch for profiles of the remaining mayor candidates, as well as the El Cajon Council candidates, soon in future installments of our Spotlight El Cajon series.