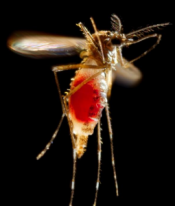 An American scientist transmitted the virus to his wife after returning home from Africa. Also Zika virus has been found in the semen of a patient in Senegal, Outbreak News has reported.

The buzz on tropical mosquitoes locally 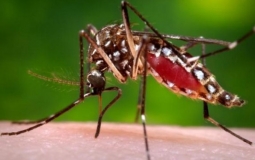 There has not yet been a case of Zika in the continental U.S. But the yellow fever mosquito (Aedes Aegypti - photo, right) and Asian Tiger mosquito (Aedes Albopictus), which can both carry the Zika virus, have spread in 2015 to more than a dozen cities and unincorporated areas of San Diego County and neighboring Imperial County –including East County.  These mosquitoes can also transmit other tropical diseases including Yellow Fever, Dengue Fever, Chikingunya and West Nile Virus.

Of these diseases, only West Nile Virus has thus far been transmitted by mosquito bites in San Diego County this far, though officials remain concerned about the potential for outbreaks of other illnesses.

“It was quicker and more widespread than any of us could have anticipated,” Chris Conlan with the San Diego County Vector Control program said of the mosquitoes’ spread, the San Diego Union-Tribune reported on December 30th.

A mosquito must first bite an infected person, such as a traveler who returned with Zika or one of the other illnesses, then bite an uninfected individual to transmit the virus.

Unlike native mosquitoes, these invaders are aggressive, are active during daytime and can breed indoors.  If you suspect you have them in your neighborhood call Vector Control at 858-694-2888 or contact vector@sdcounty.ca.gov.  Also be sure your screens are in good repair, consider avoiding going out at dawn or dusk when mosquitoes are most active or cover up with long sleeves and long pants. See below for details on insect repellants for further protection.

Travel warnings in the Americas

The Centers for Disease Control have issued travel warnings for several South and Central American countries as well as Mexico due to Zika.  There is no vaccine or cure for Zika virus, but travelers are urged to take precaution to prevent mosquito bites by using insect repellants that contain DEET, picaridin, oil of lemon eucalyptus, or IR3535.  You can also buy pre-treated clothing and gear.  Wear long-sleeves  and long-pants to minimize exposure and make sure your sleeping area has screens to keep mosquitos out, or use air conditioning and close doors/windows. If camping use mosquito netting.

California has issued a travel warning for state residents going to Mexico, South America or Hawaii. For 2015, 164 cases of chikungunya and 90 cases of dengue have been reported in California residents, all with a history of travel to areas where transmission of these diseases occurs. Though only a handful of cases of Zika have thus far occurred in Mexico,  the United States’ closest neighbor, dengue fever cases are rampant, topping 200,000 by November of last year, including 31 fatalities, Outbreak News Today reports. Chukungunya is now rampant with over 11,000 cases contracted within Mexico, according to the Pan American Health Organization. Hawaii has had over 200 cases of Dengue fever.

In the U.S., Zika virus has been confirmed in Puerto Rico, while Chikungunya transmission has been documented in Florida,  Puerto Rico and the Virgin Islands. Chikungunya is also carried by the “kissing beetle” which has been found in San Diego County, as well as by mosquitoes. A Dengue Fever outbreak has been identified on Hawaii’s big island.  West Nile Virus has been diagnosed in nearly every state in the union.

San Diego County Health officials urge residents to eliminate standing water where these mosquitoes can breed. Even a thimble full of water can be enough, and eggs can survive for weeks without any water at all.  Get rid of standing water in toys, planters, rain gutters, old tires, tarps on vehicles, etc. and be sure to regularly recycle water in ponds and fountains.  Report green pools or other standing water sources to County Vector Control.

Spread of Yellow Fever is less of a concern than the other diseases, since there is a vaccine that is generally provided to travelers to areas with known outbreaks.  A Dengue Fever vaccine, Dengvaxia, has just been approved in late December for areas with known serious outbreaks including Brazil, which accounts for over 70 percent of all Dengue Fever cases worldwide. There is no vaccine for Zika virus or chikingunya.

If you develop any of these symptoms, see your healthcare provider and be sure to tell him or her where you have recently traveled.

Chikungunya:  Symptoms occur 2 to 12 days after a bite by an infected mosquito. Chikungunya is characterized by an abrupt onset of fever frequently accompanied by joint pain. Other common signs and symptoms include muscle pain, headache, nausea, fatigue and rash. The joint pain is often very debilitating, but usually lasts for a few days or may be prolonged to weeks. Hence the virus can cause acute, subacute or chronic disease. Most patients recover fully, but in some cases joint pain may persist for months, or even years. Occasional cases of eye, neurological and heart complications have been reported, as well as gastrointestinal complaints. Serious complications are not common, but in older people, the disease can contribute to the cause of death. Often symptoms in infected individuals are mild and the infection may go unrecognized, or be misdiagnosed in areas where dengue occurs. 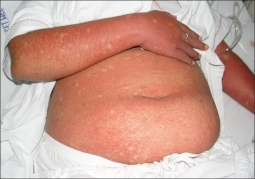 West Nile Virus:    Symptoms usually occur 3 to 12 days after being bitten by a mosquito, though West Nile Virus can also be contracted by handling a bird or other creature infected with the virus. Fortunately, 80 percent of people infected with West Nile Virus have no symptoms.  About one in five patients will develop a fever and other symptoms such as headaches, body aches, joint pain, vomiting, diarrhea or rash.  Joint pain and fatigue may linger for weeks, though most fully recover. But aAbout one percent can develop serious neurological complications such as meningitis or encephalitis, which are fatal about 10 percent of the time. Signs of serious neurological complications requiring immediate medical attention are severe headache, high fever, neck stiffness, disorientation, coma, tremors, seizures, or paralysis. There have been several deaths in San Diego County from West Nile Virus.  The elderly  and patients with cancer, kidney disease, high blood pressure and those who have received organ transplants are most at risk.

Yellow Fever: Yellow fever is an acute viral haemorrhagic disease named for the jaundice that affects some patients.  Up to 50% of severely affected persons without treatment will die.There are an estimated 200 000 cases of yellow fever, causing 30 000 deaths, worldwide each year, with 90% occurring in Africa. The virus is endemic in tropical areas of Africa and Latin America. The number of yellow fever cases has increased over the past two decades. Once contracted, the virus incubates in the body for 3 to 6 days, followed by infection. The first "acute" phase usually causes fever, muscle pain with prominent backache, headache, shivers, loss of appetite, and nausea or vomiting. Most patients improve and their symptoms disappear after 3 to 4 days. However, 15% of patients enter a second, more toxic phase within 24 hours of the initial remission. High fever returns and several body systems are affected. The patient rapidly develops jaundice and abdominal pain with vomiting. Bleeding can occur from the mouth, nose, eyes or stomach, with blood also in vomit and feces. Kidney function deteriorates. Half of patients who enter the toxic phase die within 10 to 14 days, the rest recover without significant organ damage. Yellow fever can be difficult to diagnose in early stages due to similarity to other conditions.

Zika Virus:  Only about 1 in 5 patients with Zika virus will become ill.  The most common symptoms of Zika are fever, rash, joint pain, or conjunctivitis (red eyes). Other symptoms include muscle pain, headache, pain behind the eyes, and vomiting. The illness is usually mild with symptoms lasting for several days to a week. Severe disease requiring hospitalization is uncommon and deaths due to Zika have not been reported in adults.  However, in Brazil, Zika is believed to be responsible for some 3,000 cases of microcephaly, or babies born with abnormally small brains and skulls due to their mothers being bitten by mosquitos carrying the Zika Virus while pregnant.  About 40 deaths of infants with microcephaly have occurred in Brazil in the past year , so pregnant women are urged to use extra caution if traveling in areas where Zika Virus is prevalent.

There are several reasons for the spread of these diseases to regions not previously known to have them. Climate change is one factor, with warmer temperatures conducive to mosquitoes breeding and thriving.  Global travel is another factor; infected mosquitos may hitchhike aboard a plane or ship (both species of tropical mosquitos found locally were first identified near shipyards).  Travelers infected with these illnesses who arrive in a foreign country can also spread the disease if bitten by a mosquito which then bites others. In the case of Zika Virus, sexual contact may also spread the disease.  In some areas, slacking off the Yellow Fever vaccination and/or mosquito control programs also preceded outbreaks.

With increased global travel and climate change likely here to stay, the best bet for controlling mosquito-borne illnesses is aggressive action to prevent mosquito breeding and prompt reporting of any mosquitoes suspected to be the species that carry these illnesses.