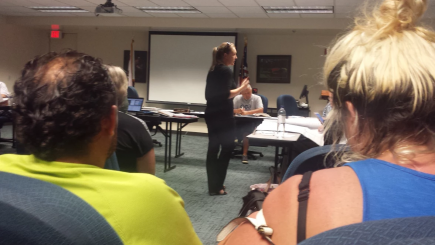 Photo: Owners of empty lot at 1056 Leland look on as Member Elizabeth Lavertu presents their site plan to the board.

July 28, 2017 (Spring Valley) -- On Tuesday., July 25th, the Spring Valley Community Planning Group’s meeting had several heated debates and almost no actionable items as two proposed duplexes were not voted on, a new Navy program was not endorsed, and the two empty seats remained vacant. The group did agree to send a letter to Richard Crompton about a .7 mile of Jamacha Rd. not being improved without revision. Despite the seeming passivity of the minutes, vigorous discussion ensued about each item on the agenda.

The Planning Group faced an unprecedented problem when a candidate for one of the open seats received approval from the County a few hours before the meeting. This meant the new candidate, Brenda Simmons, was not listed on the agenda like the other two candidates. The application Simmons passed out to the group did not have the Registrar of Voters stamp because she printed it that morning. To prove the County approved her candidacy, Simmons looked up the email on her phone. In the lower training room, there was not enough service to pull up the email, so Chairperson Lora Lowes followed Simmons outside as she looked for a better connection. As the rest of the group waited inside for the two to return, Member Elizabeth Lavertu said this was the most exciting meeting ever.

Once it was confirmed she was a legitimate candidate, the board debated whether to continue the vote with her, without her, or move the vote to the next meeting. Some members, such as Vice Chairperson Jim Custeau, felt that erring on the side of inclusion was important, in this case the inclusion of Simmons who said she had 15 years of experience in building, zoning, and community planning before her recent move to Spring Valley.

Others felt that Simmons’ last-minute candidacy was a disservice to the other two candidates who applied immediately after the posting and had already attended two or three meetings in which they introduced themselves to the planning group. Member Walter Lake yelled during the debate, “I feel like walking out!” Lowes told him to be patient. While many members had different feelings about the fairness of the situation, the legal worries about being sued for ignoring the agenda or the Registrar of Voters stamp led the group in a motion to move the appointment until the next meeting, with eight members in favor and three opposed. Custeau insisted that the competitive selection process and last-minute candidacy was a good problem to have since just a few years ago, the board had barely been able to fill seats.

Prior to the debate for Seats 8 and 14, the owners of an empty lot came with their site plan for two new duplexes. The owners chose not to bring it to a vote because when the planning group looked over the plan, the required 100 square feet of private space outside for each four-bedroom unit was missing. Lavertu, who presented the plans, thought the 400 square feet for a children’s play space would replace that, but the members found that both the private space and children’s play area are required. The other major issue the group had with the duplexes was that pavers, rather than foliage, was the only landscaping in the plan. Before leaving, the couple said that the duplexes would make the community more beautiful. Lavertu agreed that it was better than a dirt lot.

In a presentation about a new form that the County designed to waive people from filing a site plan if they meet Design Review guidelines, Lowes and Member Coreena Mulloy debated whether the form would improve or hinder the group’s ability to review new buildings. After much confusion, the group decided to invite someone from the County to come and explain the form so that they would know how to verify whether the owners were using it properly. Other concerns among the group hinged on the form only listing a place for the Chairperson to sign, which they worried meant the Chairperson could sign without a vote from the board or any record of the vote.

The next meeting of the Spring Valley Community Planning Group will be on Aug. 11 at 7 p.m. in the lower level training room at the Otay Water District. Unless there is another eleventh hour candidate, expect Seats 8 and 14 to be filled during the meeting.