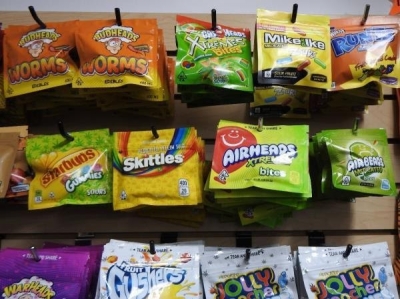 East County News Service
May 4, 2021 (Spring Valley) -- Two people are under arrest after an illegal marijuana dispensary was shut down by Sheriff's Deputies in Spring Valley. Among the items seized were candy and chips containing marijuana, with counterfeit labels resembling major brand names.

On Friday, April 30 shortly 9:00 a.m., Sheriff's Narcotics and Gang Division (NGD) members served a search warrant in the 500 block of Grand Avenue.  The warrant was part of an investigation by NGD detectives and the Rancho San Diego Sheriff's Station.

Detectives seized the following during the search: 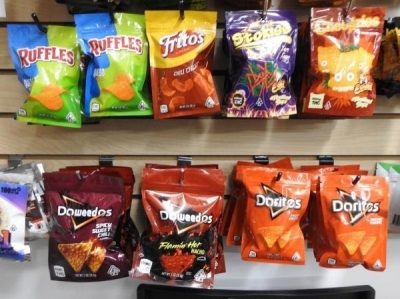 Investigators discovered several THC-infused edibles which falsely appeared to be legitimate name brand chips and candies.  It is not uncommon for unlicensed and unregulated cannabis dispensaries to market their dangerous product to children, according to the Sheriff’s Dept.  Additionally, THC-infused food products closely resembling well-known name brands may be inadvertently consumed, creating potential health and safety risks. 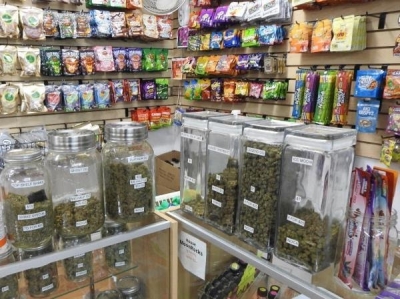 Sheriff's Detectives were accompanied by San Diego County's Code Compliance Team, which noted several violations in the building creating a danger to its occupants.  County Code Compliance requested San Diego Gas and Electric (SDG&E) to cut off power to the entire property until the dangers could be mitigated.
The warrant follows community concerns about illegal marijuana dispensaries operating near schools and residential areas.
The Sheriff’s Dept. indicates that these illegal, unregulated facilities attract criminals involved in other illicit drugs, and are often the catalyst for violent crime, property crime and financial crime that affect residents and other local businesses.