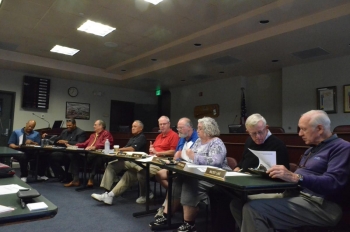 May 31, 2013 (Spring Valley)—What should be done with the former Evergreen Nursery property in Spring Valley? That was the key question before the Spring Valley Planning Group Wednesday night.

David S. Thomson, Chief Executive Officer for Mastercraft Homes Group, the owner of the property, came to offer his proposal, along with his team.

During earlier meetings there was a palpable hope that the site would be developed into a commercial site, or a mixed use residential and commercial site that would include a community meeting place for Spring Valley residents.

But Mastercraft's plan didn’t include that.  Thomson stated that “due to the economy and oversupply (of commercial property) nobody recommended that,” then noted that it is still a “bad retail environment.”

The developer looked at different types of projects, including high-density projects, a rental development, and mixed-residential use. In the end Mastercraft proposed only single family detached homes, claiming that this has the least impact on traffic. Under the proposal, Mastercraft would be targeted at first time owners, priced at $350,00 to $450,000 in current market value. A total of 149 units are proposed with a density of 7.4 units per acre. 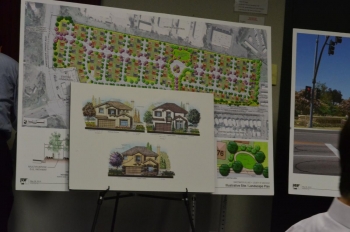 The project would include a hiking trail that the board proposed widening from eight to twelve feet to accommodate people, bicycles and horses The trail itself was moved from the back of the project to the front, and once the project is completed maintenance will be done by the County, fundedh trough resident assessments.

Bowing to the Planning Group’s request for a community aspect, the trail will have two areas with gazebos and benches at each end of the trail that fronts the property.

Edward Woodruff voiced disappointment that the plans did not include retail. He also added that the community he lives at, people were hoping that “it would have a store.”

Thomson said,that there was not enough demand, and the most they could charge would be a dollar to a dollar fifty per square foot in rent. He turned to Noole Murray of John Burns Real Estate Consulting. She explain that the study they did revealed an oversupply of commercial property. The study included surrounding communities such as La Mesa.

“We looked at mix use,” she added. “There is not enough demand.” She explained that one of the problems was freeway accessibility.

Woodruff countered, “The shopping center is gone. People are asking.”

Murray countered that it comes down to household count and demographics.

Woodruff said that it did not make sense to him, since he still could not get his shopping done, and that they were hoping they would get businesses in the community.

Lora Lowes added that this project will not give Spring Valley a commercial tax base.

Woodruff observed curtly, “it is pretty cold when people are told to get their shopping done somewhere else.” He also said that this was the last large property in Spring Valley of this nature, where a large commercial development could happen. He concluded, “Residential, that’s all we are getting out of this?”

Thomson said that the decision was driven by the oversupply of retail, and that it would be far more profitable to have a mixed use development.

Woodruff said that there was a lot of distrust, people in Spring Valley “have been let down so many times,” he noted.

Lowes also reminded the developer that there was housing to the north and west, and the east is mostly residential too, while the southern part of the town is heavy industrial. She said that it was a mistake when that was done in 1954, but she could not change that. She emphasized that this “will not be able to get a community area. We had hoped for a community space.”

Richard Preuss echoed the other members, that the board was hoping for a mixed used development; Perhaps some park land. “We would like to see more open space.”

This led to the discussion on how wide the trail was, and the applicant agreed to widen it.

In the end Woodruff was philosophical; at least this “will not be another recycling center.”

After the meeting ECM talked to both Lowes and Woodruff. They both raised the issue that especially seniors do not have a place to go shopping and cannot walk to a store. Lowes mentioned that the  County has said that if you can walk to a 7/11 that is a store. I was left with the distinct question of how much of a food desert the community of Spring Valley is? Questions from the Board Members to the applicant left the distinct impression that this was the last hope to get a major grocery store into the area.

There is one commercial space in the area, trapped in a family dispute, that is run down and mostly empty. So that does not help.

Lowes also mentioned another significant point. The trolley does not reach Spring Valley, therefore if residents do not have a private vehicle, they cannot get to the very abundant stores in La Mesa either.

In the end, planners asked the developer to go back to the drawing board and revise new plans for the property.