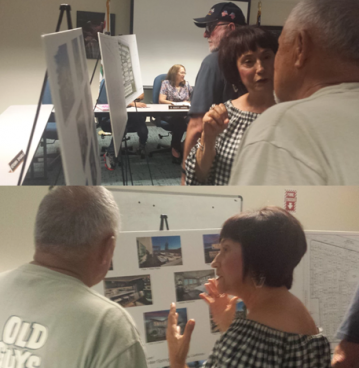 August 10, 2017 (Spring Valley) -- In the warm training room at Otay Water District headquarters, every seat was filled by Spring Valley residents who quickly grew heated by the long process before Agenda Item 5, a proposal for the old shopping center at Sweetwater Springs Boulevard and Austin Drive, was reached.

“We all know the shopping center is problematic,” said Chairperson Lora Lowes, when the presentation on Agenda Item 5 began. Ryan Green from CalAtlantic Homes presented his company’s vision for the 10.5 acres that used to hold Family Foods and several other small businesses but now hosts only decaying buildings, a church, a pizza joint, liquor store, and a Christian karate studio. Less than half of the space is leased.

Green showed the audience CalAtlantic’s plans to build 93 detached single family homes, some of which will be in a cluster format. Each house will have three to four bedrooms and a two-car garage. CalAtlantic is waiting to purchase the property until it is approved by the Spring Valley Planning Board and the County.

“I get calls daily about that property,” said Tina Carlson of the Spring Valley Chamber of Commerce. “I'm over this. It's happening. We're going to get this through. We need to get it done.”

Green showed the public pictures of the same houses that had just been unveiled by his company in Otay Ranch. “I believe I'm working on something really spectacular,” Green said.

After his presentation, residents looked at the plans before beginning to make public comments. Some residents spoke in favor of the housing development. Mike Monreau, a resident for 35 years, noted that after the large Rancho San Diego shopping center was built, everything in the center left, leaving behind rotting wood and signs that could fall over and kill people. “It is such an embarrassment. You could set the place on fire and it would be an improvement,” said Monreau.

Many residents and Board members agreed that something needed to be done. However, many still held out hope that it could be for mixed or commercial use. Others were concerned about the issues new houses would bring to an area already dealing with an increase in traffic and parking issues. 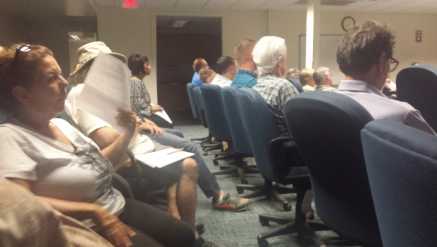 Photo, right:  Woman uses the agenda to fan herself in the hot room.

Current plans include parking 37 stalls for guests, but many audience members pointed out that most people do not use their garages and will look for other parking. Green assured the audience that homeowners’ associations are very strict on parking now but he also promised to look at the plans again and see if any other stalls could be added.

The property is in close proximity to Sweetwater Springs Community School, which already puts stress on Austin Drive and Sweetwater Springs Boulevard. Future traffic concerns already prompted the Spring Valley Planning Group to resist two developers in the past four years from building on the site. Their proposals were for higher-density housing that would have meant even more traffic, according to Lowes.

“I don't know if just because it's going to be prettier, it's going to be better,” said Member Elizabeth Lavertu. She echoed many audience members who agreed that something needed to be done on the property, but that the proposal would only be of short-term benefit to the community.

“I can do something better,” said Green, who said this is only the second blighted property his company has worked on.

Member John Eugenio expressed concern that getting rid of its commercial use would mean there would be no grocery store within walking distance for many residents. This thrusts some in Spring Valley into a food desert, an urban area in which affordable and nutritious food are not accessible.

In this deal, CalAtlantic Homes has agreed to take on all the risk with purchasing the property, which could include problems such as black mold and asbestos. While the deal with the owners could not be spoken about specifically,green and commercial real estate agent Mike Morris revealed that the family came to CalAtlantic Homes in December, did not like the deal, searched around for other commercial and residential developers, and then went back to CalAtlantic Homes when all other companies passed it up.

Morris, who works with the family trust, said that he was part of the original deal in 2006 when Home Depot tried to open a store on the property. At the time, residents rose up against the proposal because of the noise, Lowes said. In the last few months, the same commercial real estate agent went to several contacts who all passed on obtaining the property. He explained to the audience that Sweetwater Springs and Austin are not busy enough roads to make commercial use viable. He also revealed that the current owners purchased the property for $7 million in the 1970s and are selling at a loss.

“The County Planning Commission...wanted this site to be commercial, but it may not actually be feasible with so any businesses in the area going out of business,” Lowes said.

Vice Chairperson James Custeau brought up that parking and traffic may be issues for a few years, but that autonomous cars might make these issues obsolete in the future. “Commercial is not gonna happen. If we don't take this deal, this land is going to sit blighted for years to come. Decay leads to decay,” Custeau concluded.

Anger towards the Board, the ugly property, and the lack of a perfect solution grew as the audience sat in the sweltering room. After two hours, everyone had spoken and the Board summarized their thoughts on the presentation.

Green committed to looking at parking and density, but not necessarily to changing it, before the next meeting. Before leaving, he explained that he was not sweating because of the room, but rather because he was taking a huge risk in acquiring such a decrepit property. However, Green is pursuing it anyway because he is so excited about how he could better the community.

It's difficult to believe there isn't A/C in the room. The District should have provided cold water for the public.