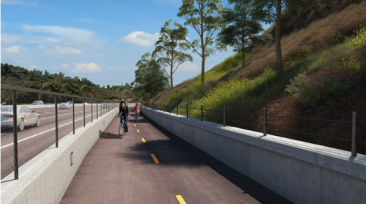 August 30, 2017 (San Diego) - Officials opened to the public today a key bikeway connection in San Diego that provides a protected bike lane parallel to State Route 15. The new bike route established a safe and convenient connection between Mission Valley and the Mid-City communities, including City Heights, Kensington-Talmadge, and Normal Heights, while eliminating challenges that riders have had to cope with on other routes including high-speed traffic and long, difficult hills.

“This ptoject is the result of our ingenuity, collaboration, and innovative management to bring another world-class Active Transportation project to the people of San Diego,” said Caltrans Director Malcolm Dougherty.

The SR 15 Bikeway creates a path that is separated from vehicle traffic by concrete barriers. It extends from Adams Avenue along a one-mile segment of northbound SR 15 to Camino Del Rio South. The 12-foot wide, two-way bike path features lighting and locations for passing/resting.

“I’m happy to see this project become a reality after many years of planning and design,” said SANDAG Chair and County Supervisor Ron Roberts. “The new bikeway provides a safe, direct connection between Mission Valley and the Mid-City communities.”

Wednesday’s event – held at Terrace Drive Mini Park adjacent to the bikeway entrance from Adams Avenue – was attended by San Diego City Councilmember Chris Ward, as well as Caltrans District 11 Director Laurie Berman. They were joined by members of the surrounding communities, as well as bike enthusiasts.

The San Diego Association of Governments (SANDAG) is the San Diego region’s primary public planning, transportation, and research agency, providing the public forum for regional policy decisions about growth, transportation planning and construction, environmental management, housing, open space, energy, public safety, and binational topics. SANDAG is governed by a Board of Directors composed of mayors, council members, and supervisors from each of the region’s 18 cities and the county government.