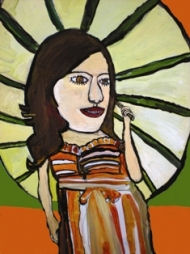 “This is the first year we have added such an impressive line-up of San Diego icons to the fashion show,” said Debra Turner Emerson, Executive Director of St. Madeleine Sophie’s Center in El Cajon. “We appreciate everyone’s support to make the 35th annual fashion show the best yet.”

With an expected attendance of 700, the 2012 Haute With Heart fashion show will feature a brand new location with plenty of parking, local designers and boutique vendors, a live and silent auction, and complimentary champagne. In addition to the celebrity models, modeling on the runway will be St. Madeleine Sophie’s Center’s students and professional models.

“I'm so excited to walk the catwalk in St. Madeline's Sophie Center's Fashion Show,” said Alexis DelChiaro, Good Morning San Diego News Anchor. “It's one of San Diego's greatest organizations and I hope we can raise a ton of money and more importantly, awareness for such a great cause."