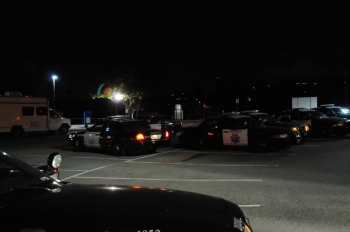 March 6, 2013 (El Cajon) – A suicidal man who doused the family home with gasoline forced a two-hour stand-off with law enforcement.  The incident on Penasco Road in the unincorporated portion of El Cajon began around 4:30 p.m., when the suspect’s mother made repeated calls for help, Lt. Eddie Brock with the San Diego Sheriff’s Department told East County Magazine.

A command station was set up at Valhalla High School nearby.

The suspect ultimately surrendered to authorities, after the police negotiator was able to convince him to give himself up and agree to be taken in for psychiatric treatment. There are no charges in this case, and according to Lt. Brock, while there are two outstanding warrants the Department does not intend to act on them at this time. The suspect is being detained on a health and welfare warrant, and will be taken to a medical facility tonight, where he can remain on an involuntary hold for upwards of 72 hours. He can also start the treatment he needs.

When the call came in, the nearest Psychiatric Emergency Response Team (PERT) was from the San Diego Police Department, which responded to the scene, as it was being contained with a hard cordon. The goal of the unit is to establish contact with the person inside the house and help to defuse the situation. These units can at times help prevent calls of this nature when they make contact with patients in the streets and get them to treatment before things get to the point that a SWAT team needs to deploy.

Last month, according to Lt. Brock, training in mental health emergencies was expanded to field supervisors and other field personnel. This is the second time these new protocols were used, resolving this crisis in a way that keeps everybody from getting hurt. The first of these expanded operations was at Encinitas two weeks ago, that also ended peacefully, even after two deputies were injured early on in the incident.

The goal of PERT training is to “prevent adversarial events from leading to death or injury.” Moreover, the “dynamics of this call were similar to those in Encinitas,” said Lt. Brock.

Lt. Brock also told ECM that this is not the first time they responded to this address, and that the suspect’s mother is filling the classic role of an enabler. Her son has some issues and needs help, he said, adding that he hopes that tonight is the beginning of a new path for this young man. Sources close to the family  have told ECM that the individual had issues with alcohol.

The Sheriff’s Department did evacuate the two neighboring homes due to the threats made early on. The neighbors were watching as law enforcement and firefighters set up for what could have been a long haul.

When will we ever learn…

I understand the bravo’s for the local law enforcement and the titillating juice for the readers, but, why doesn’t the writer of this article give consideration that the people written about might be having trouble enough without giving the actual address, the low down on the sons meth issues and being suicidal then transported to the local looney bin while the mother is being a classic enabler.

The fact is, the son wasn’t on meth, and the mom is a mom trying to parent ALONE and could use some help and/or guidance from those who could direct her to resources.  This is a family.  Real people that have to move and grove in a community that now knows the very private business the most people have but get to keep private.

Is it Lt. Brocks place to tell all to another to tell all?  When someone has to make that call for help it’s serious business.  The medical field has laws with great penalties if one spills the beans.  Shouldn’t there be some human kindness and respect not to air the dirty laundry of the one in desperate need?  This is all about help, right?