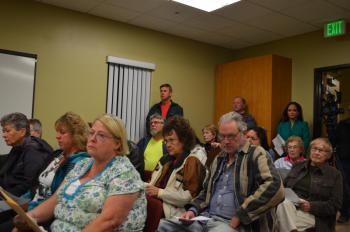 If the Rural District dissolves, the money that the County now puts into the District, to the tune of $3.6 million will continue. If the district does not dissolve, those funds will go away, and the district will only have the $1.6 million that it collects from residents. In effect, if the Fire District does not dissolve, it will have to reduce service and will only be able to staff the Jamul and Otay Stations, Director Dale Amato warned. The rest of the stations will have to go dark, or rely on volunteers—and there will be a significant degradation of fire protection service.

Residents voiced concerns over losing local control.  If the district dissolves it would have an advisory board – but Herman Reddick, the Program Manager for the County Fire Authority, made clear that an advisory board would not have the authority that the Rural Fire Protection District’s elected board currently has.

Reddick also explained that the County Fire Authority is the product of the 2003 and 2007 fires. The County had previously pulled out of the fire protection business, but got back into it after those devastating firestorms when it was clear that firefighting resources were inadequate.

But the County still does not have any guarantee of fire protection (or for that matter even a guarantee to provide Sheriff’s services) written into its County charter. Despite repeated requests from rural residents, the County has refused to add this seemingly reasonable language that would prevent the County from simply pulling the plug if the political or economic situation changes again in the future. So money assigned by the county to fire protection remains discretionary.

In effect, the County is holding a gun to rural residents’ heads—demanding that they turn over control of fire services to the County, without any guarantees in writing to assure that those services will be provided over the long term.

In some rural districts, residents have stood up and fought back against the County Fire Authority takeover—notably in Julian, Valley Center and Palomar Mountain. But here, most residents seem resigned to the takeover as the best of less-than-desirable options.

Mary Manning, a resident of Harbison Canyon, presented the Board with over a hundred signatures on petitions asking for dissolution of the district. She said that while she was “thankful for the volunteer firefighters” who have fought fires in the past, we simply “cannot go back.”

Director Lou Russo has been a vocal opponent of the takeover.  A  contentious point between Russo and the rest of the board was whether they needed a majority to go forward with the dissolution or if all directors must vote in favor of dissolution for it to occur. Russo asked and was advised that he will be provided with a copy of regulations stating that a simple majority of the board can vote to dissolve the district.

When the board asked for a show of hands, the vast majority of the people agreed that dissolution was the best way forward for the District.

Shirley Anderson, recently retired from the Local Agency Formation Commission (or LAFCO), explained the process. Essentially the Fire District applies to dissolve. At the same time the County applies to expand its latent powers to take over fire protection. They both have stipulations in their respective applications and there is a series of negotiations. In the end, one of the stipulations will be the date to dissolve, when Rural turns over the keys to the County Fire Authority.

Chief Terry Nissan emphasized that this process should be invisible to the end user, and insisted that service should remain the way it is. The Chief added that the District is moving forward with plans to expand Paramedic Service.

One of the stipulations the Board wants is the formation of an advisory board with citizens from the area. This board will not have the same authority as the present board does, but might be able to help guide decisions at the CFA. Another stipulation is to keep the current level of service, at a minimum, and expand it if possible.

At next month’s meeting, the Board will vote on whether or not to dissolve the Rural Fire Protection District.

Problems confronting other districts in the takeover process have been detailed in a prior East County Magazine series titled the Chapparal Rebellion.

Another issue before the board was the potential impact of construction at the planned casino at Jamul Indian Village on fire and emergency medical response. At its next meeting, the Board will consider steps ranging from a statement of support for the County lawsuit against CalTrans to potentially, joining the lawsuit.

This vote will also be taken at next month’s meeting on March 4 at 7 p.m.