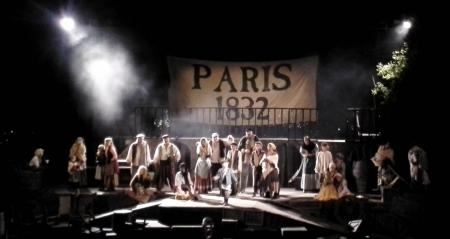 Christian Community Theater has been entertaining San Diegans and providing quality theatrical productions for over 30 years.

This summer’s performance of Les Misérables is exceptional for its casting, talent, music and singing, costumes, child actors, and technology in a fine outdoor performance of this epic work. Also, it is a return to Mt. Helix for CCT after being away for seven years.  Christian Youth Theater also participated in this production.

“Fire in the hole!” shouts the young actor before discharging his weapon, as the rehearsal on Wednesday, July 16 begins to come together. A throng of young men in street clothes have arranged themselves on and around a set meant to represent a barricade for the dramatic scene amid revolutionary France. A fair number of them have rifles. Two tall sets of scaffolding on either side of the stage hold multiple stage lights and big, black speakers. 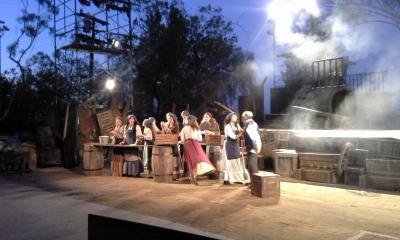 fter that, short scenes are rehearsed in succession. Two little boys in their knickers and blousy shirts with vests, caps, and brown leather shoes have to practice getting shot. Their accented voices are quite striking for ones so young. The sense of inhumanity breaks in. Jason Russell, the co-director, calls for Cosette (the young woman) played by Kelly Prendergast to come on stage.

On cue from the orchestra leader, keyboard music begins. More of the cast emerges on stage, singing along with the music as dancers—the ladies in blue, purple, and white gowns, with the men in period dress—all hold hands and move and twist their way from lower to upper stage area, then disappear.

Later when the barricade is rolled off to stage right, viewers see the backdrop of some of East County’s mountains beyond the eucalyptus tree behind center stage. The view turns to twinkling lights as the rehearsal continues into the night. The experience of being atop Mount Helix cannot be overstated. Experiencing the 360 degree view as you arrive during daylight is breath-taking. Night softly falls and you notice stars appear as your eyes rise above the spectacle on stage.

The formal dress rehearsal begins with a chain gang singing these words: “Look down, don’t look ‘em in the eye.” This opening scene, portrays the calamity and agony of Jean ValJean while the theme of class struggle is also introduced. Valjean, a French peasant, is presented with his letter of release from 19 years hard labor for stealing a loaf of bread for his starving sister’s child. Within a short time, he steals again. This time he’s forgiven and helped by a priest who gives him the greater gift of grasping a future of which he’d never dreamed. 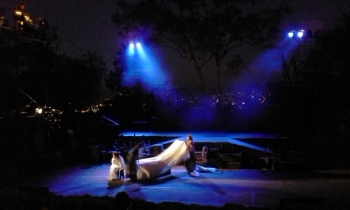 Les Miserables is an epic tale of courage and sacrifice, passion and faith, based on the novel by French poet/novelist Victor Hugo. From the opening scene to the poignant finale, the production will grip your emotions in a powerful story, compellingly portrayed.

Set in 19th century France, the story reveals Valjean’s search for redemption and his pursuit by the relentless police officer Javert.  Along the way, Valjean and a slew of characters are swept into a revolutionary period when a group of young optimists make their last stand at a barricade on the streets of Paris.

Notable performances are given by Matthew Posner, who plays a convincing lead role as Jean Valjean (both as a young and then an older man) and Jon Thuerbach as Javert, the police inspector who pursues Valjean throughout the play, self-righteous about his duty of bringing him to justice.

Each character stands out, from the innocent Cosette (played by Kelly Prendergast and two younger actresses) to the street-wise Eponine (Madelyn Adams), to the comic relief brilliantly provided by Alex Whyte and Danica Russell in their portrayals of a larcenous innkeeper and his raucous, s 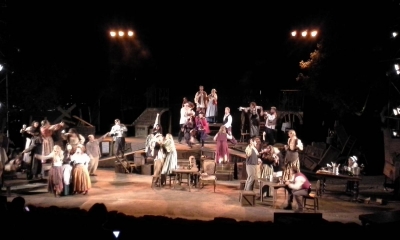 cheming wife. Tyler Tafolia also gives a noteworthy performance as Marius, the young revolutionary who falls in love with Cosette.

Coffee and food trucks are available for purchase pre-show and at the intermission. Warm clothes and blankets are recommended for your comfort.

Tickets and performance dates/times are on their website at http://www.christiancommunitytheater.com or call 619-588-0206.