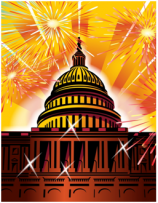 June 15, 2012 (San Diego) –Who will be squaring off in the November run-off  to represent East County and San Diego in Congress and the State Legislature?

With all but 7,000 votes counted locally, according to the Registrar, here’s a rundown on these important race--including our assessment of the odds for those vying in the November run-off election:

It was a pack mentality in the California Senate race, with 24 candidates running.  Senator Dianne Feinstein, a Democrat, finished first but with 42.63% of the vote—not a strong showing for a long-time incumbent.  Still it was far more than second-place finisher Elizabeth Emken, a Republican with 18.53%.  Other Republican candidates’ votes totaled about 25%, while other Democratic candidates combined pulled less than 8%, with the rest split among minor party candidates.  Still Feinstein has the power of name recognition—and turnout is expected to favor Democrats in November, with the presidential election and several ballot initiatives that will be draws for liberal voters.

49th Congressional District:  Democrat Jerry Tetalman scored 32.47% of the vote, beating out two challengers to go up against incumbent Republican Darrell Issa in this district encompassing the northeast portion of the county.  Issa drew 59.07% of the primary votes.  But the other two candidates listed no party affiliation, making it difficult to be certain which candidate will pull those candidates’ backers in November.

50th Congressional District:  Republican Congressman Duncan Hunter received over two-thirds of the vote (67.62%) in this renumbered district that includes most of East County.  Democrat David Secor placed second with 16.82%, besting three challengers  including a Republican, a Democrat, and an Independent.  Secor faces a steep uphill battle, however,  in this heavily Republican district long represented by the Hunter family on Capitol Hill.

51st Congressional District:  Democratic State Senator Juan Vargas took a solid 48% of the vote in a seven-candidate field.  Republican Michael Crimmins, with 20.73% of the vote, will vie against Vargas in the fall, dashing hopes of former State Senator Denise Ducheny, who drew 14.32%.  The district has one of the highest Democratic registration advantages in the state, making Vargas appear all but certain to represent this district in Congress, replacing Bob Filner, who stepped down from Congress to run for Mayor.

52nd Congressional District:  Ten days after the June primary, the counting still continues in the 52nd Congressional District. Incumbent Republican Brian Bilbray has 41.13% of the votes.  Scott Peters maintains a slim lead over fellow Democrat Lori Saldana; they have 22.64 and 22.08% percent of the vote, respectively.   With redistricting, party registration is nearly evenly split, making this a seat Democrats hope to take back from Republicans in November.

53rd Congerssional District: Democratic Congresswoman Susan Davis won the primary handily in a two-candidate race, with 57.67% over Republican Nick Popaditch, who took 42.33%.  This district has shifted boundaries with reapportionment, extending eastward to include La Mesa and much of El Cajon.  Though Popaditch is a tough fighter, Davis maintains a strong advantage as a popular incumbent.

39th State Senate District:  Assemblyman Marty Block, a Democrat who has focused on  education issues, took first place with 46.17%, followed by Republican George Plescia at 42.91%.  The remaining 9.91% of the primary vote went to Democrat Patrick Marsh in the primary, giving Block an edge—though not a shoe-in, for victory in November.

71st Assembly District:  Santee Democrat Patrick Hurley beat out Republican John McLaughlin from Temecula for the opportunity to vie against Republican Assemblyman Brian Jones, also from Santee, in November.  Given that the two Republican candidates drew over 69% of the vote collectively, however, the incumbent Jones has a strong edge in this redrawn district, which encompasses most of East County.

75th Assembly District:  With an open seat and only two candidates in the primary, Republican Marie Waldron drew more than twice as many votes as Democrat Matthew Herold, at 68.23% and 31.77% respectively.  With the number of female legislators down sharply in Sacramento, it appears likely that a San Diego Assemblywoman will be joining their ranks.

76th Assembly District:  Oddly for a district that includes coastal areas, no Democrat ran in this district’s primary.  Three Republicans vied for spots in the run-off; the winners are Rocky J. Chavez and Sherry Hodges with 38.67% and 32.66% respectively.

77th Assembly District: Republican Nathan Fletcher stepped down from the Assembly to run for mayor (though he lost his primary race).  That opens this seat , which had four candidates contending in the primary.  Former Councilman brian Mainschein, a Republican, pulled nearly half (47.49%), followed by Democrat Ruben Hernandez (24.22%), who hopes to pick up support from losing candidates’ backers for his moderate stances and platform emphasizing jobs.  Inland areas in this district include Tierrasanta, Scripps Ranch, Rancho Bernardo and Poway.

78th Assembly District:  Democratic incumbent Toni Atkins appears headed for reelection, pulling nearly 60% of the primary voters in a three-person race. Republican Ralph Denny will go up against Atkins in November, after drawing 27.9% of the vote, beating out Robert Williams who had just 12.31%.

79th Assembly District:  In this hotly contested five-candidate race, former San Diego Unified School District president Shirley Weber finished first with 30.4%, followed closely by Lemon Grove Councilwoman Mary England with 29.38%.  But England, a Republican, will be battling tall odds in November, since the district is heavily Democratic—and Democratic candidates pulled a total of 57% of the vote in the primary.  Inland areas in this district include La Mesa, Lemon Grove and City Heights.