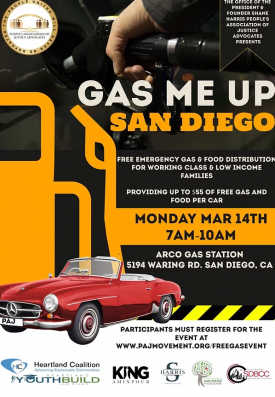 March 9, 2022 (San Diego) – Yesterday, President Joe Biden announced a ban on importing Russian oil, gas and coal due to Russia’s invasion of Ukraine.  A poll by Quinnipiac University released Monday found 71% of Americans support  ban on Russian oil even if it causes steep rises in gas prices – including 66% of Republicans, 82% of Democrats, and 70% of independents.

A nonprofit organization has organized funds to help those feeling pain at the pump locally, while political leaders are also calling for relief for consumers.

Pain at the pump is being felt locally. The average price for gas has skyrocketed to $5.60 per gallon, nearly 91 cents higher than a month ago and nearly $1.80 more than a year ago, according to AAA and Oil Price information Service. Gas prices had already risen worldwide as economies emerged from the pandemic and a resumption in travel fueled demand.  But now the war in Ukraine has sent prices soaring for 15 consecutive days, NBC 7 reports.

Patrick De Haan, head of petroleum analysis at GasBuddy, which provides price info on over 150,000 gas stations, calls the price spike “the cost of choking off Russia from energy revenue.”

President Biden, in announcing the newest sanctions on Russia, also warned oil and gas companies that “it’s no time for profiteering or price gouging.”

"In January we proposed a pause to the gas tax increase. Now it’s clear we have to go farther," Newsom said. "And that’s why working with legislative leadership I’ll be submitting a proposal to put money back in the pockets of Californians to address rising gas prices."

Newsom’s senior adviser Dee Dee Myers said that would be a rebate that could total billions of dollars, Fox business reports. The rebate would be limited to those who have cars and reside in California, Myers added. 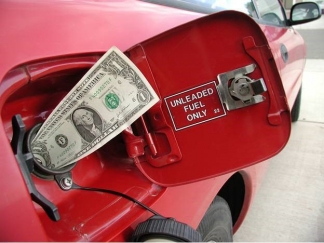 “No one should have to choose between paying their monthly bills and affording to put gas in their car,” says Supervisor Joel Anderson.  He notes that according to the state’s Legislative Analyst, using 15% of the state’s budget surplus would provide about $6.8 billion that could be used to lower gas prices by 51 cents a gallon statewide.

Anderson, along with Supervisor Jim Desmond, has launched a petition for consumers to sign.  It asks County Supervisors to vote to ask the State to suspend the gas tax temporarily.

The gas tax revenues are used to build and maintain highways, roads and bridges statewide. 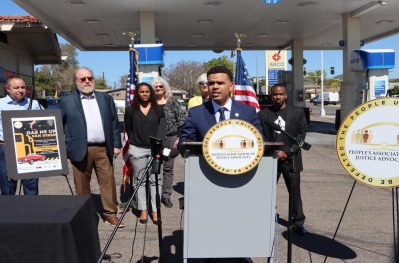 The People’s Association for Justice Advocates, led by Shane Harris, has launched the “Gas Me Up” program to provide free gas distribution to people in need.  Already the group has raised over $15,000 – enough to allow it to pump nearly $55 in gas into more than 300 cars during the program’s launch this week at an Arco station.  You can donate funds, volunteer, or sign up to receive free gas at www.PAJMovement.org/freegasevent.

Harris has also called on the Governor to declare a state of emergency due to “crisis at the pump.”