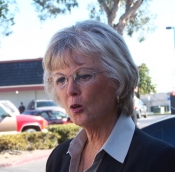 January 11, 2012 (Sacramento) – California’s Board of Forestry and Fire Protection voted today to approve a revised fire parcel fee on structures in rural areas under jurisdiction of Cal Fire.

The fee, up to $150 per habitable structure, would raise up to $100 million annually for the state, which recently cut firefighting budgets statewide. About two-thirds of impacted property owners, however, will be eligible for a reduced $115 fee if they are covered by a local fire district.

“I question the motives of the fire board and the governor for trying to triple tax rural property owners who already pay for fire protection with property taxes and special assessments,” she said. “There are fewer rural residents than urban residents, so this is a politically convenient way for the state to try to pawn off its budget mess on people in rural areas.”

The regulation will impact an estimated 800,000 habitable structures with their own assessor numbers. Under the latest revisions, an apartment building would pay a single $150 fee, however at a condominium complex, each unit owner would pay the full fee.