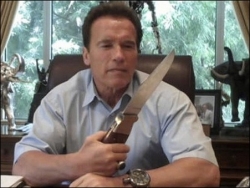 July 22, 2009 (San Diego's East County)--Governor Arnold Schwarzenegger posted a knife-wielding video to exemplify his willingness to sign a budget with deep cuts to services for Californians. The latest budget, negotiated by legislative leaders in both parties, proposes to close the $24 billion budget gap in part by forcing cities and counties to loan the state money for three years, with interest. “It would raid municipal funds for $1.9 billion, mostly county money,” the L.A. Times reports. Cities and counties would lose another billion dollars in transportation money and redevelopment agencies would be ordered to pony up an additional $1.7 billion.

Los Angeles County has threatened to sue the state and warns that the budget cuts will trigger longer responses for firefighters and rolling brownouts that will take fire engines out of service at stations across the city. An e-mail sent to Supervisor Dianne Jacob requesting comment on how the state’s proposed raid on County funds could impact San Diego was not responded to by press deadline.

The proposed budget would also slash $6 billion from K-12 education and $2.8 billion from state colleges and universities. Students will also pay the price; the California State University system this week voted to hike fees 20% in anticipation of the budget cuts. A health care program for children which Republican leaders wanted to eliminate has been spared, but will face deep funding cuts that will put thousands of youngsters on waiting lists to receive healthcare, according to the Sacramento Bee, which reported this week, “Tens of thousands of seniors and children would lose access to healthcare.”

Assemblyman Marty Block (D-Lemon Grove), in a letter to constituents, said he has opposed those tax increases that would worsen the financial burden on families already struggling to make ends meet, but wants to close tax loopholes which are currently “protecting billion-dollar corporations from contributing their fair share of revenues to our state.” Block said it makes no sense to cut in-home health services that result in sending people to emergency rooms or nursing homes, costing the state more in the long run. “Nor does it make sense to cut education and job training programs, driving some individuals to state unemployment lines, homeless shelters, or in the worst case, prisons where cost to the state are already out of control.”

Republicans have steadfastly approved any tax or fee increases, even for big oil and tobacco companies, calling instead for more belt-tightening and a reduction in waste, fraud, and size of government. The proposed budget includes consolidation and elimination of various state boards and commissions.

The budget also calls for offshore oil drilling along Santa Barbara’s coast—though a proposal to add a well-head tax on oil companies drilling in California was rejected. Chevron has threatened to leave California if such a tax is imposed, costing jobs, Assemblyman Joel Anderson (R-El Cajon) told East County Magazine. Anderson said he opposes the well-head tax because “California has the highest overall taxes in the nation for businesses.”

Lieutenant Governor John Garamendi harshly criticized the move. “The Governor just put California’s coastline up for sale when he had other options that don’t put our natural resources at risk,” Garamendi said. “He refused to approve a plan to tax oil companies that now extra oil in California to fund health care services, children’s programs and education. California is the only oil producing state without an oil severance tax, and it would generate $1.2 billion dollars annually.”

California Democratic Party Chairman John Burton blasted the proposal as a “sweetheart deal for one oil company” that was “negotiated behind closed doors without any legislative hearings to allow public comment.” In a letter to Democrats, Burton said the move strips the State Lands Commission of its power to reject oil leases and gives it to a commission appointed by Schwarzenegger. The drilling won’t solve the budget crisis, Burton said, “because its promises of future revenue are not actually written into law.”

The bill does include a vehicle tax fee increase to prevent closure of some state parks, though as many as 50 could still be shut down, East County Magazine has learned.

A proposal to release 8,000 inmates from state prison as a cost-cutting measure has been postponed after it threatened to blow apart budget negotiations this week.

A 2/3 majority is required to pass a budget. Republicans have opposed any tax or fee increases, calling for more belt-tightening and reforms instead.

Late Monday, Senator Republican leader Dennis Hollingsworth (R-Murrieta) whose district includes East County issued this statement on a tentative budget agreement: “We were able to resolve California’s $26.3 billion budget deficit without raising taxes. It solves our cash flow issues and saves money by reforming key government programs so they operate more efficiently. By being accountable for every taxpayer dollar we can save billions in future years.”

Assembly Speaker Karen Bass calls the budget compromises “painful solutions” adding that “many of the cuts we have to make would be unthinkable if we weren’t in the midst of an unprecedented and ongoing recession.” Bass said the budget prevents irreparable harm to schools and proposed elimination of California’s safety net, but noted that the two-thirds vote requirement “hamstrings our ability to pass responsible revenue solutions.”

Common Cause, a nonpartisan organization, will host a meeting with a panel of experts on August 1st in San Diego to discuss whether a Constitutional Convention for California should be convened to find a better way for state government to operate—including eliminating the 2/3 vote requirement for budgets, a requirement only two other states currently have. The meeting will be held on August 1st from 12 to 2 p.m. at the Mission Valley Library community room, 2123 Fenton Parkway in San Diego. For details and to RSVP, visit http://www.commoncause.org/CA/SanDiegoMeeting.

The budget is expected to be voted upon this week, perhaps as early as today. If you wish to express your opinion to your legislator, you can find contact information for all State Senate and State Assembly members representing our region in the “Sound Off” section of our Capitol Report at: http://www.eastcountymagazine.org/?q=0809soundoff.