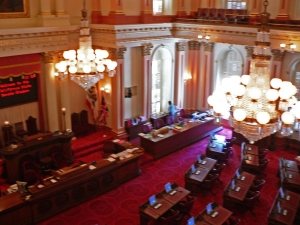 July 7, 2015 (Sacramento)--As the legislative session draws near its close, a flurry of bills are making their way through the state Capitol this week. Here is an update on several key measures: motorcycle lane-splitting, discrimination against transplant patients using medical marijuana, a patient right-to-die bill, and sick-time pay for California workers.

Currently 49 states have made lane-splitting illegal – that’s the practice of motorcyclists whizzing between cars along the edges of lanes to bypass slow traffic on freeways.  Only California has no law on the books to ban the practice.  A study found that of 5,000 rush hour motorcycle accidents, 1000 involved lane-splitting. Assembly Bill 51 sought to set guidelines, while still keeping lane-splitting legal.  But opposition from motorcyclists put the skids on the measure which failed to win passage in this legislative session, however the author, Assemblyman Bill Quirk, has vowed to try again next year.

Governor Jerry Brown has signed Assembly Bill 258, which prohibits hospitals from refusing organ transplants to medical marijuana patients. The measure was introduced after some medical marijuana patients were reportedly denied life-saving transplants because doctors classified them as drug abusers. Americans for Safe Access estimates that 1,150 Californians were at risk of being denied organs.

Senate Bill 128, which would allow doctors to assists terminally ill patients who choose to end their lives may be on life support.  The measure passed the State Senate on a party-line vote, with only Democrats in favor and Republicans against. But it expected to come up short of votes needed to pass the Assembly’s Health Committee, the Sacramento Bee reports. The bill would require that two different doctors confirm a terminal diagnosis of six months or less left to live. The patient would have to make two requests for euthanasia support, 15 days apart, and self-administer the lethal dosages.

A bill to require that employers give workers three paid sick days off each year has been signed into law by Governor Brown. That measure was authored by San Diego Assemblywoman Lorena Gonzalez.