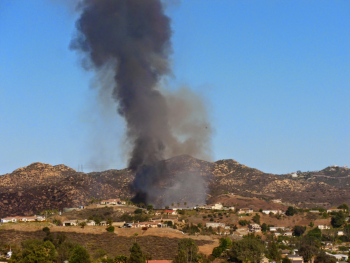 May 14, 2014 (San Diego)—San Diego Board of Supervisors Chair Dianne Jacob today declared a countywide emergency due to at least eight fires now burning.  A Red Flag alert has been extended through tomorrow night.

An evacuation center has been set up at El Capitan High School for 1,300 ordered evacuated in the Wintergardens area of Lakeside. Business Highway 8 from Pepper Drive to Los Coches Road is closed.  The fire is now in mop up with no structures lost; evacuations will be lifted at approximately 9 p.m., Chief Andy Parr of Lakeside Fire told ECM.

The County urges people NOT to call the 911 system unless it is a dire emergency. They ask citizens use the 211 system. The 911 system is taxed.  One ECM reader reported getting a busy signal trying to call 911 to report the Lakeside fire this afternoon.

Numerous school districts have ordered schools closed tomorrow, including many in East County. Closures include:

Cal State San Marcos has received orders to evacuate. There are 30 structures reported destroyed in the San Marcos area.

At the Grossmont Union High School District, AP exams will be rescheduled, the district's website states.

Over 23,000 people have been notified through the Alert San Diego system in the area directly affected on whether they need to evacuate or be alert for it. And if you are asked to evacuate, while the Sheriffs cannot force you to leave, they urge you to leave. One of the lessons from the 2007 fire, people died when they waited too long to leave.

San Diego Gas and Electric also asks residents to conserve energy, and reports 9,000 customers without power. The utility has also announced plans to proactively cut off power in high-fire risk conditions to prevent lines from sparking fires, so be prepared for outages.

If you are away and your area is evacuated, animal control asks that you call 619-236-2341 to get assistance.

So far the East County has had a few small fires in addition to the Lakeside blaze, which has forced evacuation of a mobile home park on Aurora, and a large plume south of the Mexican border that generated multiple smoke checks.

We recommend during this emergency that in addition to getting our e-mail alerts, you also follow ViejasAlerts on www.Twitter.com, which can reach your mobile phone wherever you are.

You can listen to Rural Fire, Cal Fire, NORTHCOM and Heartland Fire scanner traffic online at

If you have photos or firsthand information please email photos or details to editor@eastcountymagazine.org .