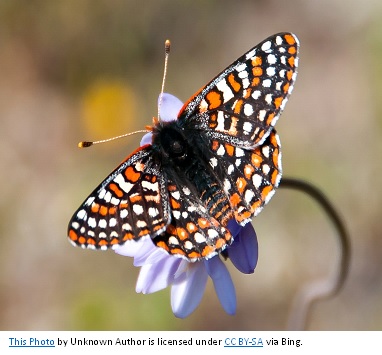 July 2, 2020 (San Diego)—Once the most common butterfly in Southern California, the Quino Checkerspot Butterfly has lost over 70 percent of its habitat.  It’s been listed as a federally endangered species since 1997, but is not on California Endangered Species Act. That could soon change, if a petition filed this week by the Center for Biological Diversity and the Endangered Habitats League is successful.

The butterfly is now found only in San Diego and Riverside Counties. The petition, filed with the California Fish and Game Commission, would make the colorful butterfly an endangered species under state law, giving stronger protections against habitat destruction and fragmentation, climate change, nitrogen pollution, invasive species and enforcement.

The petition, filed with the California Fish and Game Commission, notes that the Quino checkerspot was once one of the most common butterflies in Southern California. But with the rapid spread of urban sprawl, the butterfly has lost more than 75 percent of its historic habitat and in 1997 was listed as endangered under the federal Endangered Species Act.

"It's alarming that a butterfly that once filled the skies of Southern California is now only found in pockets of its former range," said Dr. Tara Cornelisse, an insect scientist at the Center for Biological Diversity. "Even more alarming is that some of those few critical patches of remaining habitat are slated to be developed. With insects declining at a frightening rate, we need to protect more habitat for endangered butterflies, not allow it to be carved up piece by piece."

Sightings of the butterfly has declined to just 33 of 62 historic sites over the past ten years in San Diego and Riverside counties, according to the center. Among projects on 6,500 acres threatening the endangered butterfly are the border wall now under construction.

The butterfly can be identified by its checkerboard pattern of white and orange spots on black wings.

"By first decreasing the butterfly's designated critical habitat and then allowing large-scale development projects within its few remaining strongholds, the Trump administration has failed to protect this endangered butterfly," said Dan Silver, petition coauthor and executive director of Endangered Habitats League. "To have a chance at surviving rampant development and other threats like climate change and invasive species, the Quino checkerspot butterfly urgently needs California state protection."

Under the California Endangered Species Act (CEQA), the California Department of Fish and Wildlife has three months to make a recommendation to the Fish and Game Commission, which will then vote on the petition at a public hearing. If the Quino checkerspot butterfly wins protection under the act, the state can subsequently enact its own protections.