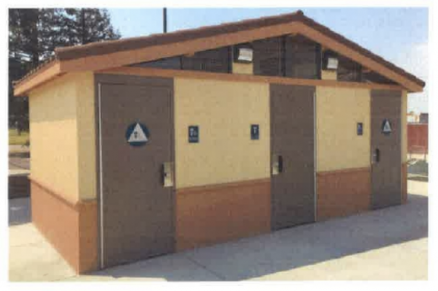 Photo: New restrooms may look similar to these, according to Mayor Racquel Vasquez

February 21, 2022 (Lemon Grove) — “I’m really excited to be able to replace these aging, crumbling bathrooms,” reveled Councilmember Jennifer Mendoza. According to her, the restrooms at the Berry Street and Washington Street parks are going on 60 years old.

Approved by a three to one vote last Thursday night at the Lemon Grove City Council’s surprise second meeting of the week, the projects will uplift two of the City’s most popular parks with a public restroom revamp many say is long-overdue.

Checking off capital improvement projects like this one in Lemon Grove often requires picking and choosing around budget restrictions. However, the new bathrooms will be one less burden to worry about, thanks to a state grant from Assemblymember Akilah Weber’s office for up to $400,000.

Mayor Racquel Vasquez explained the importance of the project in her letter to Dr. Weber.

“At a combined size of 10 acres, these parks serve as the much-needed recreational space for all Lemon Grove residents to exercise, barbecue, play, walk their pets, and enjoy the solace of green open space,” she wrote.

“Because Lemon Grove is so ‘park poor,’” continued the Mayor’s letter, ( a ratio of 0.536  park acreage per 1,000 residents) “these two parks are even more of a necessity to encourage healthy and active lifestyles.”

However, before the projects were approved, Councilmembers George Gastil and Liana LeBaron asked for clarification on why the projects would be so costly.

“It’s not a formal bid,” answered Assistant City Manager Mike James, who explained that the City just needed to give the state an estimated cost to be in the running for the grant money. “Staff reached out to local cities that had performed almost identical projects to this — the cost was approximately $400,000.”

James and city staff also verified the cost with a vendor who has provided prefabricated restrooms to other cities, a model Lemon Grove may choose as well. The prefabricated units come ready to install to plumbing, and are ADA compliant, gender-neutral, and built to last.

Yet Councilmember LeBaron was not convinced that the process of receiving the state money was a benefit to Lemon Grove’s taxpayers, and she continued to question why the search for a lower rate was not more highly prioritized.

At this point, a discussion ensued with the City attorney over what was appropriate to discuss with a motion on the table. Frequently called out by Mayor Vasquez for interrupting others and talking out of turn, Councilmember LeBaron continued to voice her deliberations while the City Clerk was eventually instructed to call the vote. LeBaron was counted as the sole ‘no’ vote, although she did not cast an official vote on the record.  Councilman Jerry Jones was absent.

“My vote today would have been no,” clarified Councilmember LeBaron during a recess following the vote. “I wasn’t allowed to cast it, and I wasn’t allowed to explain my vote, but those are the reasons why. Whether you folks agree with that or not, I want you all to know the thought process behind my decisions so that you’re able to hold me accountable.”

With the motion carrying, staff will now work on finalizing the design and construction elements of the projects. The window for being reimbursed by the state grant closes in June of 2024 — but James assured that the restrooms can be completed before then.

The frictions on the City Council were as apparent during this second meeting as much as at the meeting abruptly adjourned early just two days before amid clashes between LeBaron and Vasquez.  A recording of  Thursday night can be viewed at https://www.youtube.com/watch?v=SyEqTy5x7Jw.

The situation has some on the City Council emphasizing the importance of collaboration in finding solutions to help their underfunded city.

“It’s not the questions but the combative and disrespectful style and disruptive presence on Lemon Grove’s Council that has caused the rift between LeBaron and the rest of Council,” wrote Councilmember Jerry Jones in a remark posted in the comments section after ECM’s article on the recent meeting.

His comment continues, “Keeping in mind that there have been bitter disagreements between the others of us in the recent past. I even ran against the Mayor in the last election. We are all together in condemning this obstructive, disrespectful, disruptive, and bullying behavior.”

According to Jones, LeBaron’s “constant lists of requests are not in line with the Council’s policy of setting an annual work plan.” He objects not to her questions, but the timing and manner, he added. “ She can ask any time, but these things are better addressed on an annual basis with our goal setting policy and budget development. This is why she gets no response from the rest of us. Good policy is not made by responding to every squeaky wheel between this annual process without good cause.”

Councilmember Mendoza felt similarly, that it was often the manner in which LeBaron approached her job that created objections. “She has wonderful ideas,” she said, citing LeBaron’s savviness in suggesting how to use funds. “But you can’t do it on your own.”

I am sorry for your loss.

For the record I was out of town with my family in Seattle to attend my uncle's funeral. Jerry Jones