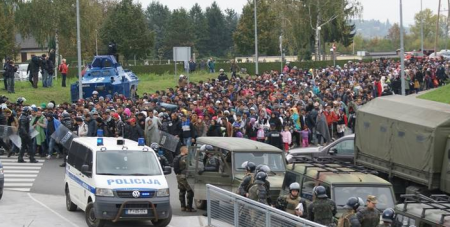 Refugees in Europe, most fleeing ISIS, risk death with winter approaching if not enough places will accept them. But fear of potential terrorism has led some nations to bar entry.

November 16, 2015 (San Diego’s East County) – After Friday's terrorist attacks in Paris, for which the Islamic State (ISIS) has claimed responsibility, President Barack Obama reaffirmed his commitment to admit 10,000 Syrian refugees into the U.S. over the next year.

But governors in half of all states nationwide have reportedly said that they oppose taking any Syrian refugees in their states, or want to postpone admitting them until screen procedures are approved, according to reports by Associated Press, CNN and USA Today.

Governors don’t have the power to actually block refugees from their states, since immigration regulation is a federal power.  But they could deny state benefits or programs, making refugees feel unwelcome, NPR reports.

The 25 governors who don’t want Syrian refugees include 24 Republicans and 1 Democrat, from New Hampshire.  Those opposed include most southern and Midwestern states as well as states as far north as Maine. Even the governors of Michigan and Texas, two states that have welcomed many refugees in the past, want to block entry to Syrians due to terrorism fears.

Presidential candidate Donald Trump has warned that Syrian refugees could include “Trojan horses”, or terrorists masquerading as refugees fleeing ISIS.  French authorities have concluded that the plot was organiEd in Syria. One of the suspected Paris attackers is believed to have possessed a passport indicating he was a refugee, but others were French nationals. The purported mastermind of the Paris attacks,  however, Belgian Abdelhamid Abaaoud, freely cross borders in  Europe  after coming from Syria, despite being on terorrist watch lists for voilent threats made in an ISIS propaganda magazine; six of the terrorists are believed to have ties to Syria, CNN reports.

Europe has received a flood of refugees seeking asylum, including more than a half million in the first six months of this year – and more than 52% of those are Syrians.  Desperate to escape ISIS terrorists, many of the refugees came via boats and rafts to Europe from Northern Africa – voyages that have ended in tragedy for many others when vessels sank in the Mediterranean sea.

The image of a drowned little boy washed up on a shoreline sparked international attention to Europe’s growing refugee crisis, with some countries initially opening their doors to accept the migrants and others building fences to keep them out. With winter coming, international aid groups warn that those in refugee camps could die of exposure if no safe havens are found.  The United Nations has urged the U.S. to take even more than the 10,000 refugees that President Obama has agreed to accept over the coming year.

Jeb Bush of Florida said he believes the U.S. has a responsibility to accept some Syrian refugees, but added, “I think our focus ought to be on the Christians who have no place in Syria anymore.” Similarly, Senator Ted Cruz has suggested only Christians should be admitted, not Muslims, though his own father fled Cuba as a refugee to come to America after being tortured.

But President  Obama said that while there should be rigorous screening of refugees for security purposes, there should not be a”religious test”  which he characterized as un-American.  The President said America must “step up and do its part” adding it is important that “we do not close our hearts to these victims of such violence and somehow start equating the issue of refugtees with the issue of terrorism.”

At least 13 state governors have said they are willing to accept Syrian refugees, including California.  The rest have not yet taken a stand.

California Governor Jerry Brown, asked by the Sacramento Bee about the issue, replied, “I intend to work closely with the President so that he can both uphold America’s traditional role as a place of asylum, but also ensure that anyone seeking refuge in America is fully vetted in a sophisticated and utterly reliable way. You can be sure that we will do everything in our power to protect the people of our state.”

watch this refugee video - This is being imported to America via Obama's massive illegal immigration and refugee resettlement ... America will soon be an impotent minority in their own country. http://www.breitbart.com/london/2015/11/11/watch-anti-migrant-video-going-viral-across-europe/