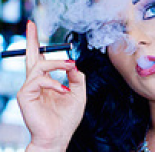 January 29, 2020 (Sacramento)-- A random sampling of the cannabis products seized from unlicensed retailers during a major enforcement operation in Los Angeles last month were found to contain undisclosed additives, some of them potentially dangerous, and significantly lower amounts of THC than claimed on the label.  Vaping pens containing ingredients linked to sudden respiratory illnesses and deaths were among those seized.

California’s Bureau of Cannabis Control (Bureau) seized more than 10,000 illegal vape pens from unlicensed cannabis retailers in Los Angeles during a three-day enforcement operation in December 2019, in coordination with other state agencies and the City of Los Angeles. The operation resulted in 125 arrests, seizure of more than two tons of cannabis and cannabis products worth more than $10 million, and the seizure of 11 illegal firearms.

“The prevalence of dirty and dangerous vape pens at unlicensed cannabis stores demonstrate how important it is for consumers to purchase cannabis goods from licensed retailers, which are required to sell products that meet state testing and labeling standards,” said Bureau Chief Lori Ajax. “We urge consumers to scan the QR code to confirm that a business is licensed.”

Some of the illegal vape cartridges seized as a result of the search warrants were tested by the California Department of Public Health. Of those samples, 75% contained undisclosed additives, including cutting agents such as Vitamin E, Vitamin E Acetate, Propylene Glycol (PG), Polyethylene Glycol (PEG) and Medium Chain Triglycerides (MCT). In some samples, the vape cartridge was comprised of more than 30% agents.

The Bureau recently launched a campaign encouraging consumers to look for and scan a QR code when they visit a licensed cannabis retailer. Smartphone users can easily use their camera to scan the displayed QR code, which automatically links to the Bureau’s Online License Search and confirms the cannabis retailer’s license status. The system also displays the retailer’s address and license location to ensure that the information is not counterfeit.

An educational video showing consumers how to scan and verify a cannabis retailer’s QR code can be found here. For consumers without a QR code-enabled phone, they can also check a retailer’s license information by visiting the Bureau’s license search tool at CApotcheck.com.

All commercial cannabis activity in California must be conducted on a premise with a valid license issued by the appropriate state cannabis licensing authority. Manufacturing, distributing or selling cannabis goods without a state license or at a location that is not licensed is a violation of state law. To file a complaint regarding illegal cannabis activity, click here – Enforcement Online Services.