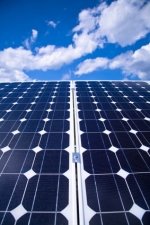 September 3, 2010 (San Diego) – This week, the California Public Utilities Comission approved a San Diego Gas & Electric (SDG&E) solar power initiative that will provide for 100 megawatts (MW) of photovoltaic (PV) solar energy. Under the initiative, 26 MW of utility-owned generation would be slated for construction on existing SDG&E property, with the remaining 74 MW to be purchased from independent power producers.

The initiative could more than double the approximately 80 MW of solar power currently generated in the utility's service territory.

The program calls for SDG&E to install and procure renewable solar power using projects primarily in the one to two megawatt range and also provides for PV solar installations ranging from less than a megawatt up to 5 MW. In addition to developing its own local solar projects, SDG&E will solicit power purchase agreements for solar power at other sites in the region.

SDG&E’s local solar initiative is designed to complement the 1 MW or less solar projects currently developed under the direction of the California Solar Initiative. A megawatt is enough power to serve approximately 650 homes.

“This is good news, though it could have been even better if they had required that all generation sites be in-county to strengthen our grid, specified that projects be built with local companies to provide jobs, and utilize local capital,” said Mark Hanson, executive director of Heartland Coalition, dba United Green, a San Diego-based nonprofit which provides job training in green technologies and green housing retrofits.

“The economic ripple effect from 100 megawatts, about half a billion dollars, could be six-fold—that’s $3 billion--for local retention of jobs and economic revitalization from the green industry,” said Hanson,  also a candidate for the 77th Assembly district.  He has secured pledges from 32 green industry companies seeking to relocate in California, including several targeting San Diego County, through his United Green efforts.

According to the decision, the preferred location of these new solar arrays will help meet anticipated high power demand and/or assist in minimizing congestion on SDG&E’s power grid.

“Today’s decision reflects the ongoing need for a flexible portfolio of solar resources and options that will help SDG&E derive one-third of its energy from renewable sources by 2020,” said James P. Avery, senior vice president of power supply for the company. “This program is beneficial because it further expands our solar power footprint within our service territory and brings that clean, renewable power closer to the areas of greatest demand.”

Very informative post.Thanks for sharing this.

How about we just build these new power arrays and skip building the Sunrise Powerlink?