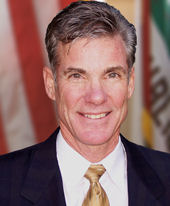 May 4, 2012 (San Francisco)  -- Joined by parents and teachers, State Superintendent of Public Instruction Tom Torlakson called upon the Legislature to renew its commitment to quality early learning programs by rejecting more than $500 million in proposed budget cuts to California's child care and early learning programs.

The cuts would come on top of nearly $700 million in reductions made earlier to child care and early learning programs and would eliminate services for about 62,000 low-income children statewide.

If enacted as proposed, the total cuts to these services would amount to a 42 percent reduction in state funding for child care over just four years.
“California has long been committed to the principle that children deserve to start life with a chance to learn and grow, and now is not the time to abandon that commitment,” Torlakson said. “We need a budget that acknowledges the fundamental role quality child care plays in the future of our children and the competitiveness of our state.
Cutting support for child care would fly in the face of literally decades of research into the benefits of strong early childhood education programs,” Torlakson said at a news conference at the City College of San Francisco’s (CCSF) Mission Lab School.
Torlakson was joined at the news conference by the CCSF Board of Trustees President, John Rizzo; the CCSF Interim Vice Chancellor of Academic Affairs, Joanne Low; CCSF Child Development Department Chair Kathleen White; and by students and parents who depend on the program.
For information on the proposed child care cuts, please visit the CDE Web site at Child Care Funding Testimony. There is additional information on the CCSF program at Child Development and Family Studies.