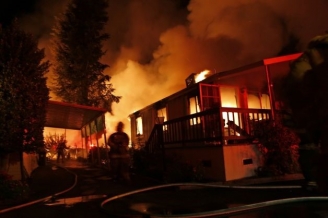 May 29, 2018 (Sacramento) – By a 24-11 vote, the California State Senate today passed Senate Bill 894, a bill to help wildfire survivors who were underinsured rebuild their lives after devastating disasters.  Republicans opposed the bill, while all Democrats (except one) voted in support.

"This is an important bill that will not only assist current wildfire survivors, but will also help to jump start the rebuilding and economic recovery process," said Insurance Commissioner Dave Jones. "Residents who have lost everything are struggling to recover and rebuild their homes and lives. This bill will provide much-needed protections and improve chances for recovery."

SB 894 provides survivors the option to combine various coverages within their homeowner policy to offset any underinsured amount in their primary dwelling. This provision would only be triggered in the event of a total loss following a declared disaster where the survivor is underinsured in their primary dwelling or Coverage A. Underinsurance is not only a financial blow to disaster survivors, it is economically devastating to communities because, as one of the most challenging obstacles to loss recovery, it causes claim settlements to be delayed.

SB 894 would also extend policy renewal protections for survivors retroactively to July 1, 2017 to alleviate the burden on survivors who find it impossible to get new coverage during the planning and rebuilding phase of the recovery. Under this bill, survivors would be able to renew their insurance policy twice, which would cover two years after the loss. The bill would also extend the amount of time to collect living expenses from two years to three. Both provisions reflect the reality that it takes most survivors more time than currently permitted to rebuild or replace the total loss property.

The bill now moves to the Assembly for consideration.

Here's our story on that latest development:

For being underinsured in California. You can't expect to carry coverage on a dime and get a dollar in return, its that simple. This issue has been on the burner for almost 15 years.....Fire victims find they're not covered You could always complain to the California Insurance Commissioner, Dave Jones!.......But, you wont.............because he's a DemocRAT.

they are underinsured. A lot of people don't realize how much replacement costs of homes have risen, especially older people.  If it was never disclosed to them, how would they know?

A little heavy on the anti-Liberal bias. Wasn’t it this supposed “Swamp Draining” President and his Conservative Congress that just rolled back Dodd-Frank and Volcker rules or was it just all more Liberal “Fake News” on the prowl again? Setting Parties aside, why is the Middle Class to be the provider of the Bank’s Insurance and why is that deemed an acceptable risk by our Leadership that should be protecting us unwilling Insurers as their first priority?

Okay Im going to pull my Fire and Earthquake Insurance! Why? Pun.... Because the democrats in power will come save me from the billions we non-insured homeowners did not pay for in the first place. What a crock! I lived in Santa Rosa and raised a family before moving to San Diego. In Santa Rosa the homes that burnt down were owned by millionaires , Those Millionaires owned the properties of the lower income status. But they now want the state to pay for the multi million dollar homes that were destroyed. ( Fountain Grove ) Sonoma Mountain Road) Cloverdale, Santa Rosa ! ... All Money properties in the multi millions of dollars, that did not have the insurance to cover the loss. I Cry not as I know many of them personally all heavy Democratic citizens looking for the bailout. It was the worst thing have ever seen, But Sh8t happens and your need to have insurance.. Free bail outs ? Then why have insurance?
...would anyone vote against this bill which clearly helps the less fortunate who need our help? We, as a civilized people, should help one another with no misgivings.