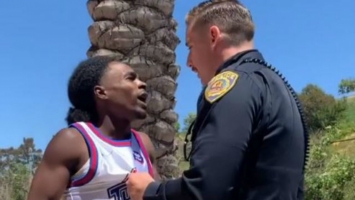 Photo: Bill could revoke licenses from officers such as fired LMPD officer Matt Dages, who is charged with falsifying a police report after a stop involving Amaurie Johnson.

May 28, 2021 (Sacramento)  -- California may soon become the 47th state to require decertification of police officers who conduct serious offenses, an action aimed at ending the option for “bad apple” officers to move to another law enforcement department and potentially reoffend.

The bill would create a new state license for police officers which could be revoked if an officer is convicted of a serious crime or is fired due to misconduct, including violating a person’s civil rights.

The action could prevent officers such as Matt Dages from taking a job with another police department in California. Dages was fired by the La Mesa Police Department and charged by the District Attorney with falsifying a police report after the controversial stop of a young black man, Amaurie Johnson. Dages falsely accused Johnson of assault, but multiple videos including body cam footage showed otherwise. One video went viral on social media, sparking outrage two days before a racial justice protest ended in a riot and the burning down of three buildings in La Mesa. Dages has filed a lawsuit against the city seeking to regain his job.

Derek Chauvin, the Minneapolis police officer found guilty of murdering George Floyd, had 18 complaints on his official record and was twice disciplined. The complaints included striking a 14-year-old black teen in the head with a flashlight, causing injury that required stitches, and holding the boy under his knee for nearly 17 minutes, ignoring his complaints that he could not breathe. Had Chauvin been ousted after that incident, he would not have been able to kill Floyd in a disturbingly similar manner, holding his knee on Floyd’s neck for nine minutes.

The California measure, Senate Bill 2, is coauthored by Senators Toni Atkins (D-San Diego) and Steven Bradford (D- Los Angeles).  It passed the state Senate 26-9, with Republicans opposed. The bill will next go to the Assembly for consideration.

Bradford added in his arguments for the bill, “It’s easier to lose a license for giving a bad perm than it is for killing an unarmed man.”

The bill also limits police immunity from civil rights lawsuits, though an amendment in committee weakened that provision.

SB 2 is expected to undergo more scrutiny in the Assembly over the composition of a disciplinary board that critics say allows for bias against law enforcement officers.