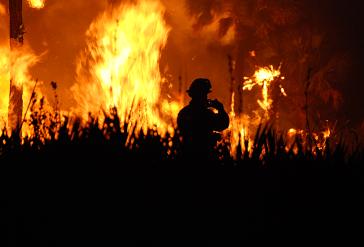 June 1, 2018 (Sacramento) -- The California Senate this week passed a comprehensive package of bills in response to the increasing frequency and intensity of wildfires in our state, addressing last year’s horrific fires and taking steps to prevent future devastation. The measures will next move to the Assembly for consideration.

“Man-made climate change has forced a new unfortunate reality on us, one that has brought a growing number of deadly natural disasters,” said Senate President pro Tem Toni Atkins (D-San Diego). “My Senate colleagues, in partnership with Governor Brown, have taken the lead to ensure that the state is doing everything it can to keep Californians safe.”

SB 1260, by Sen. Hannah-Beth Jackson (D-Santa Barbara), clears the path for controlled burns by collaborating with federal, state and private landowners to implement responsible prescribed burning on federally and privately owned property in the state. Additionally, the bill would fund removal of dead trees from high fire-hazard zones and establish a cost-sharing program to assist homeowners in fire-hazard zones with fire-resistance improvements. The bill also allows the state’s fire agency to provide input during subdivision planning in fire-hazard regions and calls on the California Air Resources Board to develop an air-quality and smoke-monitoring program for prescribed burns.

“The 2017 wildfires devastated communities, destroyed homes and claimed lives throughout our state,” Jackson said. “The Thomas Fire in my district alone burned over 282,000 acres, a total of 440 square miles, and led to a deadly debris flow, while the Northern California fires destroyed over 8,000 structures and took 44 lives. With our changing climate, we have to face reality of frequent and severe wildfires and take concrete action to ensure our communities are better prepared. That includes modifying our forest management practices in light of the impacts of climate change on our natural resources.”

SB 901, by Sen. Bill Dodd (D-Napa), requires electric utilities to adopt wildfire mitigation plans that include policies and procedures for determining if, when and where to temporarily de-energize a power line during extreme weather. The bill also requires the Public Utilities Commission to review plans and would help prevent wildfires from downed lines.

“In a world of dramatic climate change where wildfire risks are greater than ever, we must require utilities to proactively minimize the chances of igniting yet another devastating fire,” Dodd said.

SB 1088, also by Sen. Dodd, builds a comprehensive framework for strengthening utility infrastructure to prevent future catastrophes such as wildfires and to avoid the astronomical costs associated with disasters. The bill would impose fines on any utility that fails to comply with these standards or meet their duty to make needed safety investments.

“By mandating that utilities meet new safety, reliability and resiliency requirements, we can avoid these catastrophic fires before they start,” Dodd said. “My colleagues in the Senate made clear that we cannot and will not wait for the next disaster strike before we act.”

SB 894, by Sen. Dodd and Sen. Mike McGuire (D-Healdsburg), enacts critical insurance reforms to help victims of wildfires and other major disasters. The bill allows disaster victims to combine claims for destroyed contents and accessory structures and use those funds to rebuild their home if it is underinsured. The bill would also provide three years of coverage for living expenses for victims struggling to rebuild and ensure that insurance companies provide victims with renewals for at least two years.

“Destructive wildfires over the past few years have revealed shortcomings in our consumer protections for policyholders,” Dodd said. “This bill will provide important relief for victims working to put their lives back together.”

SB 824, the Wildfire Safety and Recovery Act, by Sen. Ricardo Lara (D-Bell Gardens), prohibits insurance companies from cancelling or not renewing a homeowner’s policy for one year if they live in a county with a declared state of emergency. It extends protections that currently exist for homeowners who lose property in a fire or disaster to their neighbors whose homes survive, and it orders insurance companies to report detailed wildfire risk data to the Department of Insurance, in order to increase transparency in risk assessment.

“With extreme wildfire risk and climate-caused disasters in California’s future, we have to protect all homeowners from becoming the victims of insurance cancellation or non-renewal,” Lara said. “The deadly North Bay and Ventura fires exposed homeowners’ vulnerability, even if their homes survived the flames. The Wildfire Safety and Recovery Act will help stabilize communities, home values and insurance markets following a natural disaster.”

SB 917, by Sen. Jackson, clarifies that, under current law, an insurance policy covers loss or damage resulting from a landslide if that landslide was attributable to a condition already covered by the policy, such as wildfires.

“Following a traumatic event like the Montecito debris flow, homeowners deserve accurate, fair and timely resolution of their claims,” Jackson said. “SB 917 will help California homeowners who are still struggling to rebuild by ensuring insurance providers cover losses incurred from these fire-induced events.”

“The size and scope of wild land fires in California are getting worse. Lives depend on the Legislature and Governor taking swift action to ensure statewide emergency-alert standards are adopted, training for local emergency managers is implemented and we invest in a more proactive and effective mutual aid response system,” McGuire said. “The safety of our communities depends on it.”

In addition to this legislative package, the Senate has proposed a budget that makes critical forest-fire protection and mitigation investments, including roughly $483 million for fire-prevention efforts and approximately $551 million for mitigation efforts.

The Senate is also fighting for enhanced mutual aid firefighting resources and funding to protect our communities from the rising threats of wildfires. While California’s Mutual Aid System is world-renowned, 2017 confirmed the severe strain that the system currently faces. More than 35,600 mutual aid requests were made last year, of which 11,000 (31 percent) went unfilled, Senator Atkins’ office reports. This is a record amount in our state’s history.