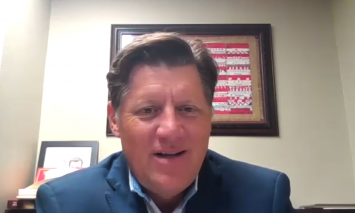 Updated October 7, 2021 with status of bills signed or vetoed

Interviews State Senator Brian Jones (R-Santee) via Zoom.  The Senator discussed his legislative accomplishments in getting several bills passed by the Legislature and onto the Governor’s desk.

Several have been signed into law, including a measure to help homeless students get resources, a bill to protect foster children from human trafficking, and another to require that conservancy hearings remain private unless a judge finds a compelling reason to make them public.

Others remain pending, including a bill require personal protective gear for social workers during a pandemic, and more.

The Senator also spoke out on concerns over what he views as not enough clearing of forest lands to prevent devastating wildfires, even though funds for the clearing have long been allocated. In addition, he raised criticisms over the state’s homelessness policies and concerns about crime.

Here are Jones' bills passed the the legislature. All have been signed into law by Governor Gavin Newsom, except SB 549, which was vetoed. Read veto message.

On wildfires, Jones cited a June 2021 Cap Radio report which critized Governor Newsom and revealed that only a small fraction of funds allocated  for clearing forest lands to prevent fires has actually been spent and many key projects have not been completed. "The most fire-prone area in our region is my district," he noted.

Jones wants to see tree clearing done and would support hiring private contractors to work under Cal Fire Supervision if need be. He blames enviornmental regulations for the delays. Cal Fire spokesman Thom Porter has blamed delays in part on environmental approvals not coming through as yet but also on the COVID-19 pandemic that sidelined many firefighters as well as this year's extreme fire conditions that have led to an all-hands-on-deck approach to combat fires in the worst wildfire season on record.

In addition, he called on the U.S. Forest Service to do more clearing. "There's areas of the Sierras where 20% of the trees are dead...and it's a tinderbox. When fire hits that, it's going to explode," he said.  The Biden administration recently did approve a policy change to allow more clearing on federal lands.

The Senator also discussed his ideas on homelessness. He opposes the housing first approach and instead wants a "carrot and stick" approach that would provide help for those who need it (such as his bill signed into law to connect homeless students with resources). But he wants a tougher approach to those with addiction or mental illness problems who refuse help. He noted a rise in homeless camps near his district office in El Cajon and indicated that due to decriminalizing some petty crimes, police have lost tools for holding those who steal accountable.

The Senator indicates he is willing to work across the aisle with Democratic colleages who control the Legislature, where possible, to put through measures to benefit people in his district and others across California.

Senator Jones encourages any constituents who need help with a state agency to contact his staff for help.  You can find contact information for his offices at https://jones.cssrc.us/my-offices.

After our radio show deadline, Cal Fire  Resource Management Communications Officer Christine McMorrow responded to our request for an update on how much fuel reduction Cal Fire has completed since the CapRadio report in June referenced by Senator Jones. Below is her response:

I have attached our fuels reduction numbers for the last five years. Fiscal Year 2020/2021 numbers are still being reconciled as we will continue to receive grantee invoices through the end of the month.

There is a big difference between carbon emissions on new wood burning versus dinosaur blood burning when you're working with carbon emissions. But if u dont get it under control Senator we will have more permafrost melting and thats in the hundreds to thousands of years range, also emitting carbon as opposed to being a net carbon sink which it was until anthropogenic carbon emission warmed the planet so that now even permafrost is emitting more carbon than it captures oh no what now?

couldn't get things like a religious freedom measure related to COVID shutdowns passed in the Democratic-controlled legislature.  He is wise to work across the aisle where possible and be respectful of colleagues in both parties, which is how statesmen used to get things done in Congress before things became so bitterly divided down party lines.

Things like helping homeless students and making sure social workers have masks during a pandemic shouldn't be partisan issues.  The Senator said that in some parts of the state there were long delays placing foster kids in homes because there wasn't any PPE for social workers.

I'm glad he wasn't able to pass the bad bills