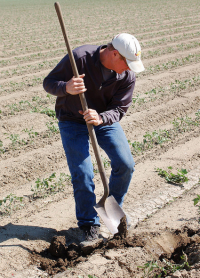 June 12, 2015 (Sacramento) – Ever since California established its water rights system back in 1914, senior water rights holders with claims before 1914 have been able to freely use as much water as they could pump.  But for the first time ever, the State Water Resources Control Board has ordered curtailment of water use by 114 of the state’s oldest water rights holders, including farmers, rural and urban water districts in the Sacramento delta as well as the Sacramento and San Joaquin river watersheds.

The order does not affect entities with water rights dating back before 1903, such as the city of San Francisco.  But the Sacramento Bee reports that officials indicate the water board will soon be targeting even those historic water rights holders.

The action comes amid a fourth year of record drought, news from NASA satellite imagery that groundwater sources are being depleted, and now a U.S. Geological Survey report finding lands across California are sinking a foot a year or more due to over-pumping of groundwater, causing severe damage to roads, bridges, wells and canals.

The order won’t affect water already pumped out and stored in reservoirs by senior water rights holders who anticipated the state’s curtailment action.

But not everyone is taking the order in stride.

The Oakdale Irrigation District has announced plans to sue the state. Byron Bethany Irrigation District in Contra Costa County had indicated it’s considering litigation as well. The district is refusing orders to cut off deliveries to the Mountain House suburb, since doing so would leave the community with no water at all.

Paul Wenger, president of the California Farm Bureau, issued this statement in response. “With every turn of the screw as water supplies shrink, more people suffer. Water shortages undermine rural economies, both in the short term and the long term, and these additional shortages will spread that impact to more people in more places.”

“California must remove obstacles to development of new water storage and pursue new supplies through recycling, desalination and other technologies,” he concluded.