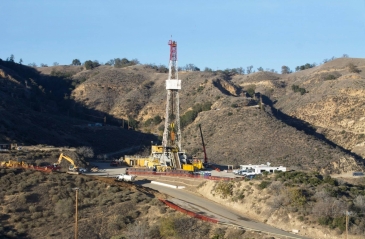 The massive leak pumped about 100,000 tons of methane into the atmosphere over several months before it was finally plugged.  That’s the equivalent of 8 million metric tons of carbon dioxide -- several times more than the 1.5 million metric tons of greenhouse gas emissions that California reduced last year through its landmark climate change regulations.

Now the California Air Resources Board wants Southern California Gas to pay for offsetting those emissions. How?  By paying to plug abandoned wells, fund purchase of more efficient furnaces and water heaters for property owners, reduce methane-producing waste at landfills, and install devices to capture methane at dairy farms across the state, according to a plan proposed by regulators.

The mitigation plan was ordered by Governor Jerry Brown.  The utility has agreed to pay for these  pollution-slashing measures over the next 5 or 10 years, under the  proposal.

Sempra has estimated its cost to date from the leak at $330 million, including the lost gas and temporarily relocation costs for thousands of residents displaced.

According to the Los Angeles Times, company spokesperson Melissa Bailey said the company was evaluating actions "to fully mitigate the climate impacts of the gas leak."

The word “ratepayers” does not appear in the proposal, so it appears regulators have not yet addressed whether Sempra could charge back its costs related to the leak and the greenhouse gas emission mitigations to ratepayers.

But in the recent past, the California Public Utilities has approved plans to leave ratepayers, not shareholders footing the bill at least in part for utility-caused errors such as the San Onofre nuclear facility radiation leaks that led to a permanent shutdown and the 2007 wildfires that state regulators found to be caused in part by SDG&E power lines. So ratepayers in San Diego and across Southern California,  where utility rates are already among the highest in the nation, may well see yet another rate hike in the future.

The only way to ensure ratepayers are treated fairly is by the creation of municipal utility districts, similar to what Anaheim has. Instead of the CPUC, accountability would be by local elected municipal commissioners. This would not be the case with CCA's. Those are still controlled by the CPUC.