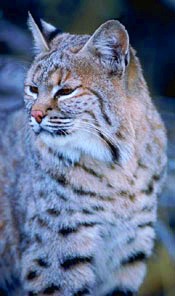 July 27, 2015 (San Diego’s East County) – The California Fish & Game Commission is considering a statewide ban on bobcat trapping.   Public comments are being accepted through August 5th.  The ban would not prohibit hunting or killing of bobcats that prey on livestock, such as chickens.  It would only ban trapping bobcats for their pelts.

A petition urging commissioners to vote for the ban has been setup by wildlife protection advocates.  View or sign the petition.

The proposal dates back to 2013, when Governor Jerry Brown signed the Bobcat Protection Act into law.  Originally the bill would have banned bobcat trapping statewide but under pressure from the trapping lobbyists, it was weakened to only require the California Fish and Game Commission to ban  trapping of bobcats in or near national parks, state parks, monuments, preserves, national wildlife refuges and private conservation areas.

But Fish & Game Commissioner Richard Rogers has asked for a complete ban on all bobcat trapping statewide.  The Commission is expected to vote August 5th at its next meeting.

Back in 2011-2012, the year before the Bobcat Protection Law was passed, trappers killed around 1,500 bobcats—supplying a lucrative fur industry including China and Russia, where bobcat pelts can reportedly fetch  up to $2,100 apiece.

Supporters of the ban packed a Fish & Game meeting in April, asking that trapping be banned statewide.

The San Francisco Chronicle has reported that the state’s estimate of 70,000 bobcats is 30 years old, so there is no accurate number on the state’s current bobcat popoulatoin.

Opponents of the ban include the U.S. Sportsmen’s Alliance, which argues that no ban should be considered until population studies are complete.  But while it’s possible that bobcat populations are thriving, it’s also possible that they have declined to precipitously low numbers particularly given four years of drought, wildfires, and encroachment into habitat by development in addition to trapping.

The California Outdoor Heritage Alliance has argued that banning bobcat trapping could lead to an increase in poaching, a concern echoed by at least one state game warden at the April meeting.

But Commissioner Michael Sutton has said he is skeptical of that argument, noting that similar claims have been used to justify hunting endangered rhinos and elephants.   Legal hunting has generally not proven effective at reducing poaching there, he stated.

Supporters testifying for the ban included elementary school children who called the trapping of bobcats “cruel” and urged that these beautiful wild cats be protected.