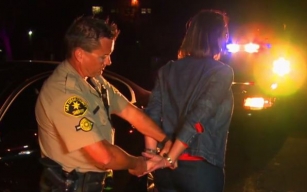 June 30, 2017 (San Diego) - The San Diego County Sheriff’s Department wants everyone to have a safe Independence Day free of serious injuries or jail time. That means never driving if you’ve been drinking alcohol or taking drugs (including medications that impair your driving), never setting off illegal fireworks and not allowing juveniles to drink alcohol at your house party.

Fireworks should be left to permitted professionals. Anyone else possessing, making, transporting or setting them off is breaking the law. Illegal fireworks can cause serious injuries and spark fires.

Four people were killed last year and more than 11,000 injured due to fireworks-related injuries according to the U.S. Consumer Product Safety Commission report. Burns accounted for nearly 70 percent of all injuries, and 900 visits to the emergency rooms were related to sparklers, 400 for bottle rockets. The other injuries were cuts and shrapnel-related wounds from exploding fireworks.

This week San Diego County law enforcement agencies sent a united message to residents asking them not to drive while impaired by alcohol or drugs. They will also be increasing efforts to spot offenders countywide over the long holiday weekend. The Drive Sober or Get Pulled Over campaign begins Saturday.

“Fourteen people and an unborn baby have died so far this year due to people who have chosen to drink or use drugs and drive,” said Summer Stephan, Chief Deputy District Attorney. “We’re not going to call it a tragedy because it really is about individual responsibility and choice. I want to be clear, drinking and driving is a choice. Taking someone’s life is a serious crime. Don’t let your choice become your crime.”

San Diego County Assistant Sheriff Mike Barnett said they have been seeing a disturbing trend that has so far doubled the number of drugged driver arrests this year, which is equally as illegal and dangerous as driving while under the influence of alcohol.

The Sheriff’s Department arrested six people for DUI on the Fourth of July in 2016. In 2015, deputies arrested seven people during the same period.

Escondido Police Chief Craig Carter speaking on behalf of all local police departments, said there will be various sobriety checkpoints and saturation patrols, which is when law enforcement saturate an area where there have been previous DUI arrests, across the county.

Officials reminded residents to make a plan before a party or night out, and to either use a designated sober driver or to consider ridesharing or taxi services to ensure everyone gets home alive.

The Sheriff’s Department also wants to remind San Diegans who may be throwing Fourth of July parties, to make sure they are aware of the Social Host ordinance which makes the host legally responsible if minors are provided with alcohol and illegally consume alcohol. To report underage drinking, call (858) 565-5200.