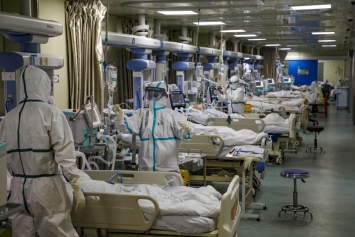 Times of San Diego, a member of the San Diego Online News Association

December 5, 2020 (San Diego) -- Stay-at-home will likely go into effect at midnight Sunday in San Diego County and Southern California after available beds in intensive care units, as expected, dropped below 15%.

The region’s ICU capacity measured 13.1% on Friday because of the growing number of coronavirus cases, the California Department of Public Health announced Friday night.

Under the order issued Thursday by Gov. Gavin Newsom, if ICU capacity remains under 15% on Saturday afternoon, then the lockdown would begin  the following day, which is Sunday.

It would remain in effect for three weeks.

When triggered, the order bars gatherings of people from different households.

The following businesses/recreational facilities will be forced to close:

Schools with waivers may remain open, as well as sites deemed “critical infrastructure.”  Retail stores will be limited to 20% capacity.

Entertainment productions, including professional sports, would be allowed to continue without live audiences.

Some of those restrictions remain in effect in select counties.

Newsom called the order “fundamentally predicated on the need to stop gathering with people outside of your household, to do what you can to keep most of your activities outside and, of course, always … wear face coverings, wear a mask.”

On Friday, a number of counties in the Bay Area announced a pre-emptive stay-at-home order even though ICU capacity in that region is above the threshhold.

Editor’s Note: An earlier version of this article incorrectly reported that the stay-at-home order could begin on Saturday afternoon.

– From Staff and Wire Reports