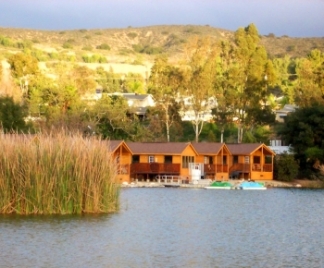 February 22, 2018 (Santee) -- Ever since wood cabins were built at the end of Santee Lakes some seven years ago, I’ve been curious about what they were like.

I’ve stayed in a few cabins in my life, some quite rustic and spartan, and others with all the stuff you’d ever need if you’re “camping,” including one that had a spa tub.

The cabins at Santee Lakes are definitely at the higher end, in fact, downright luxurious with just about everything a family would need to enjoy one of America’s best campgrounds situated smack dab in the middle of Santee. 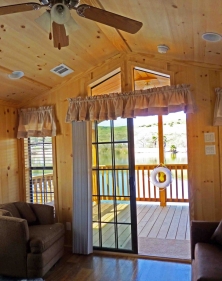 There are only 10 cabins, with three floating right over Lake 7, and the rest on the lakefront. All come with a kitchen and decent-sized bathroom in addition to one bedroom with a queen-sized mattress, bunk beds, and a porch along with a grill and Adirondack chairs. 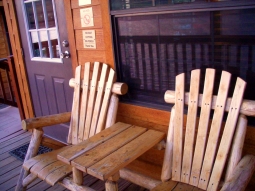 The bunk beds can accommodate two, and the living room can sleep two, so the maximum allowed at the lakefront cabins is six people.

For cabins on the lakefront there’s a fire ring to complete your camp-out. The nightly fee also includes use of pedal boats. And of course, Wifi is part of the deal.

Cabins, which average about 400 square feet, come with most of the items you need in terms of cooking including a coffee pot and toaster. Visitors are asked to bring their own linens, blankets, towels and toiletries. Sleeping bags should suffice instead of sheets.

Ever since the cabins became available, they’ve been a big hit, say campground officials.

“We are booked the majority of the year,” said Nina Tarantino, Santee Lakes Park and Recreation manager. “As soon as they go on sale at the last day of the month (for the following month) they tend to get filled up.” 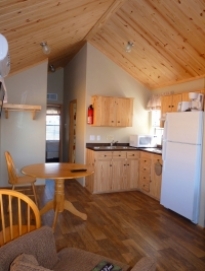 any other things, Santee Lakes adopted a market rate schedule for its campsites and cabins. On weekdays from Sunday to Thursday, the cabins go for $99 per night, but increase to $130 on weekends. But that’s the off-peak fees. 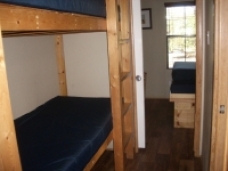 ght on weekends. Peak rates are in effect during Thanksgiving week, and the year-end winter break as well.

Tarantino says it’s tough to get the cabins on any weekend, but vacancies can be had on week nights. The night we stayed, the one ADA-compliant cabin was vacant, but the one to our left was occupied by a couple from Michigan who were staying for the week.

“We have visitors from all over. They’re from the local area and from all over the country, it’s a mix,” Tarantino said. She couldn’t give a breakdown but a look at some of the license plates on our walk around the campground found vehicles from the Midwest, South and East Coast.

More than 660,000 visitors annually come to Santee Lakes, Tarantino said. That's based on 2012; it may be even more now.

A big attraction to Santee Lakes is the fishing and the Padre Dam Municipal Water District, the agency that owns and operates the park, keeps the seven lakes well stocked during the year. In fact, at last year’s special eve 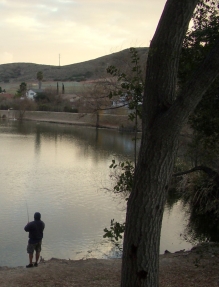 nt called Stockzilla on Sept.30 and Oct. 1, the new trout infusion drew 801 anglers. The park was packed that weekend as evidenced fr 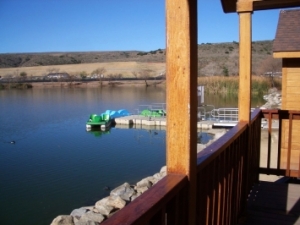 om a nearly $10,000 in sales at its camp general store, according to a recent district report.

The two main fish are trout and catfish, but the lakes carry bass, blue gill and carp as well. You don’t need a state fishing license, but you must purchase a one-day fishing permit for $9 for adults, and $6 for 15 and under children.

We observed a fisherman for a bit at Lake 6 who caught a fish and immediately threw it back. Except for bass, which are strictly catch and release, the other fish (up to a limit of five) can be kept.

Besides fishing, there’s plenty of other activities available at Santee Lakes including walking, bird watching, boating/ canoeing, bicycling, swimming (at the campground’s pool for only campers), volleyball, and picnicking. If the latter activity involves a group, the fees to reserve an area range from $45 to $390 for a gazebo site, Tarantino said. 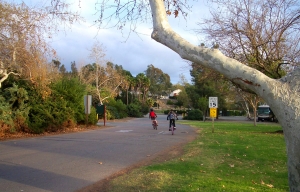 These fees all support and pay for Santee Lakes’ $5.3 million annual budget and are not supplemented in any way from the water bills paid by Padre Dam Water District customers, Tarantino said. 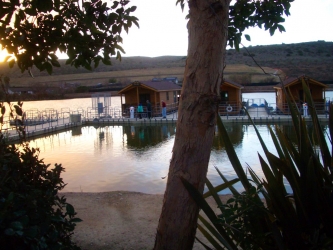 The district, which opened the lakes to the public in 1961, is always working on maintaining the grounds while adding improvements that attract new visitors and keep current users coming back.

Bill Pommering, president of the Santee Lakes Foundation, said the cabins at lake 7 “have pretty much been successful over what the board thought it would be in terms of usage and occupancy.” He said the occupancy rate was better than 85 percent.

The nonprofit foundation raises funds to help pay for new enhancements like the Bark Park last year. Other projects that were done last year at the park include a new Wifi tower, an operations storage shed near lake 1, palm tree removals and shade additions, according to a recent report.

“It’s an extremely well run park and there are constant improvements being done there,” Pommering said. 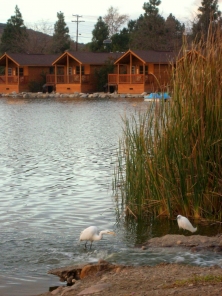 One “improvement” that wasn’t done was a water ski operation which the board approved in 2008 but because of the recession and the operator’s inability to secure financing, failed to materialize, he said.

Over the years, the board has discussed expanding the number of cabins, but so far, hasn’t decided on doing so, Pommering said. A 20-year Dynamic Vision Plan for future projects shows a yurt village for lake 4. 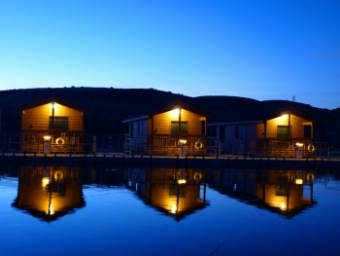 tled onto the lake, we concluded our jaunt, taking in an egret stalking his dinner along the shore. The white bird held his head frozen for several minutes before it stabbed quickly and was rewarded with a small fish.

We retired to our temporary home to grill our dinner, and enjoy more of the natural world that often escapes our view.