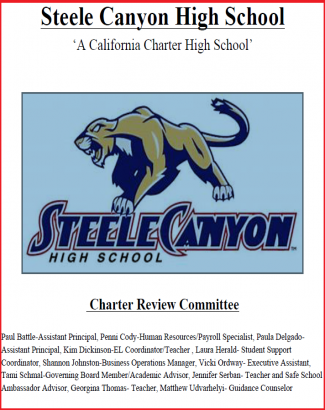 November 13, 2019 (San Diego’s East County) -- Steele Canyon High School is yet another charter that landed in hot water recently, following allegations of violating the law and acting undemocratically to undermine parents’ rights. The accusations are signed by two of its governing board members – Vice-Chair Timothy Abbott and newly installed board member Mark Robak. Both are both accusing the charter committee of excluding parents from decisional power during the process of renewing the charter’s authorization with Grossmont Union School District, the school’s sponsor.

Abbott and Robak are also battling with the school’s governing board about new changes in the bylaws that were allegedly included without proper notification and which are  “undemocratic,” according to Robak. “Similar examples may be found in Venezuela and Cuba,” wrote Robak in a letter of protest sent on October 30 to Scott Parr, CEO of the governing board and Principal at Steele Canyon High School (SCHS).

Robak claimed that when Parr was asked to “characterize the modification of both documents, “ the CEO of the governing board “described them as minor in nature.” However, Abbott and Robak noted that the changes in the bylaws are significant. In the same letter to Parr, Robak wrote, “Even more troubling is that you did not point out this significant change to the Board when Tim Abbott asked you to characterize the proposed changes. That was misleading and not an honest characterization.”

Following these allegations, the SCHS governing board scheduled an emergency meeting on November 6th, although the board was previously notified Robak could not attend due to a scheduling conflict. In his Oct. 30th letter, Robak claimed the board violated the Brown Act by failing to provide documentation about both the charter renewal application and the school’s bylaws at least 72 hours in advance. “In this case, there was not sufficient information provided in advance and there stil 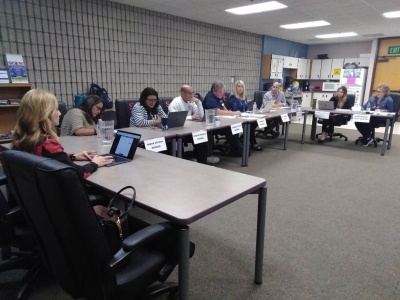 Stacy Achenbach, Chair of the governing board, wrote back, “There is no requirement that supporting documents be provided 72 or even 24 hours in advance.” However, the Brown Act specifies, “The notice shall be delivered personally or by any other means and shall be received at least 24 hours before the time of the meeting as specified in the notice."

Abbott and Robak are mainly trying to contest the legitimacy of a new statement included in the bylaws specifying that directors could be removed with a “majority of votes with or without cause.”

Abbott said after the November 6th meeting, “It’s ambiguous and I feel that it would be fairly easy to remove a board member as long as you have four votes for whatever reasons.” Abbott mentioned that the original bylaws stated five sevenths of the votes were necessary to remove a member, but now a simple majority of four votes will be the norm. Asked what would he do if the governing board would decide to remove him “without cause,” Abbott said, “That’s conjecture, I hope that doesn’t happen to me. I don’t deserve that, but my response would be determined upon the reason I was given for being removed.”

There would be no reason  required, though, based on the new bylaws that allows the board to dismiss a member “without cause.”

During the meeting, board member Jennifer Hunt pointed out that the group would still need to vote on the removal. Abbott answered, “But the vote was also diminished.”

Hunt said, “With the bylaws change that was proposed, the reason would be not to put ourselves in a position to tie up the board on determining cause that could be lengthy and time consuming and take away from the intent of the board, which is to make sure the school is providing the support for the students.” Hunt added, “I am not interested in spending time talking about adults.”

CEO of the governing board and school principal Scott Parr explained that new changes in the bylaws were based on the legal recommendations provided by Young, Minney & Corr, a law firm hired by the board to revise its legal documents. Parr said, “I think what they recommend is updated with corporate code throughout, rather than our 2008 bylaws simply with some revisions.”

“ (a) Subject to subdivisions (b) and (f), any or all directors may be removed without cause if:

(1) In a corporation with fewer than 50 members, the removal is approved by a majority of all members ( Section 5033 ).”

Parr added the legal firm has seen “ A total of maybe two attempts to remove a board member. (...) The idea of the big picture being not to limit the board too much in a situation  where a board member is acting in a way that harms the charter school.”

The question is, what are the criteria to determine what is considered “harm done to the charter school?”

The governing board of Steele Canyon High School has three staff members and three community members led by Parr, who does not have voting powers. According to Abbott, who is a parent of two SCHS students and  has served as an elected board member for the past nine years, “The community members are local business owners, parents of the children at the school who run for terms in closed elections only voted upon by the parents of the students currently enrolled. The staff members are elected by their peers.”

What would happen if an elected member is removed “without cause” following a majority of votes? Abbott said, “You have to interpret what’s written, but I do know there is a process to fill the vacancies if a director is removed.”

Robak and Abbott claimed that the documents should have been redlined as well to expedite the process of going through over a hundred pages of documentation in just two days before the last board meeting. Achenbach answered, “Redlining of the documents is the responsibility of the individual board member, and not any particular member of the SCHS staff.”

Abbott pointed out that providing a red-lined version of the Bylaws and renewal documents would have helped with spotting the inconsistencies between the few versions provided. One version was the bylaws from 2008, when the document was last updated. A second version came with legal recommendations provided by Young, Minney & Corr, the law firm hired by the board to revise its legal documents. The third version was the final one which Abbott and Robak claimed was comprised without following the proper procedure to allow ample time for documentation and discussions.

During the last board meeting in October, Abbott proposed a motion for continuation that was rejected. Last week, Abbott tried again to sensitize the board members to discuss the inconsistencies and possible law violations, but the board voted five to one 1 to adopt both the renewal application and the new bylaws.

Moreover, Robak said the charter committee that worked on the Petition for Renewal of the Charter is solely comprised by staff members, without any parent or other key stakeholders with interests in the process.

Consequently, Robak filed a complaint with the Grossmont Union High School District (GUHSD) the charter school’s sponsor. The  GUHSD will review the application for reauthorization this evening during the regular board meeting at 6 p.m. at the East County Regional Education Center, 924 East Main St., El Cajon.

On December 16, the GUHSD board will have a public hearing to discuss the renewal application, followed by another meeting on January 26 next year to render a decision.

Will the SCHS governing board meet again to continue the dialogue about the “inconsistencies” signaled by Abbott and Robak? Parr told Abbott, “If you wish.”

Editor's note:  Video of  Nov. 6 Steele Canyon board meeting to be posted shortly.