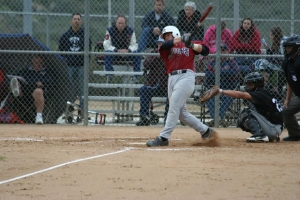 March 6, 2014 (San Diego’s East County) -- The Steele Canyon Cougars finished the 2013 varsity baseball season, (4-11) in league, and (14-15) overall. Shortstop Tanner Perry was one of the bright spots last season, as he made all-league. Perry also plays basketball, and is the key senior amongst many returning this season.  Helping the turnaround, first year coach  and former Oakland Athletic Dan Nerat, will be commanding the Cougars this year to assist Perry and his teammates reach the promise land.

Perry has lived in the East County his whole life, and has played organized baseball for many years. Tanner is not too far in terms of distance from what school he should be attending, Granite Hills. When questioned as to why he chose Steele Canyon, he replied,  “ I had more friends attending Steele, and also  prefer their athletic department.”

As for last year, referencing recently acquired coach Dan Nerat, Perry stated, “He brings a lot of positive energy, and gets things done, like getting equipment, nice jerseys, etc.”  Perry continued, “We will have much improved hitting and pitching, along with great defense.” 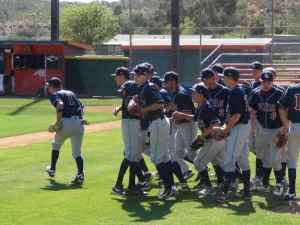 The Cougars are also working on improved base running capabilities, especially working on not getting picked off. When asked what his Achilles heel, is, he said, “I need to work on batting the guys in and executing in all facets of the game.”

According to Perry, there was a lot of negative energy on and off the field last year. The Cougars have 10 returning players, all improved with the help of Coach Nerat. The key players to look for along with Perry, are Mackey and Finn according to Perry.

When asked about who will be the tough teams to contend with, Perry had this to say.  “Grossmont has great pitching, as well as Valhalla and Granite Hills, it will be tough.  Perry loves the game of baseball so much that he also plays with a travel ball team, the San Diego Gamers.

Another reason for Tanner’s success is the support he receives at home, and when on the field his parents try to make it to all of his games. Tanner also has two step  brothers that play junior varsity baseball for rival Granite Hills.

Perry tries to model his play after Robinson Cano of the New York Yankees. His reasoning behind his favorite player? The way he carries himself as a smooth character, very patient, and his swing.

For the future, Perry is looking to attend a junior college locally and has his eye on Grossmont College in particular. He hopes one day to be recruited by a division 1 school. He would also love the opportunity to play in the majors if possible.

Tanner Perry in 2013 had a .422 batting average, 32 runs batted in, 3 home runs, and 9 stolen bases. He looks to improve and double all his totals in 2014. The Cougars according to Perry and Coach Dan Nerat are on pace to capture the title, as the positive atmosphere has turned things around.

Look for the Cougars to crawl out of the cellar and up to the top.