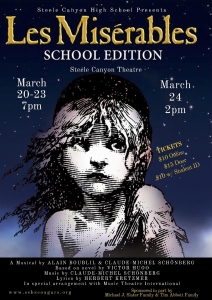 March 3, 2019 (Spring Valley) -- Steele Canyon High School presents the world’s longest running musical, Les Misérables. This modern classic, based on Victor Hugo’s novel, features one of the most memorable scores of all time. The production includes over 130 students in the cast, crew and orchestra. According to Theatre Director, Nicole LaBella and Music Director, Heather Luck, Steele Canyon High School musicals are unique as they are the only school in the area to perform with live orchestral accompaniment.

In 19th century France, Jean Valjean (Jackson Shaffer), released from years of unjust imprisonment, finds only mistrust and mistreatment. He breaks his parole in hopes of starting a new life, initiating a lifelong struggle for redemption. He is relentlessly pursued by police inspector Javert (Sean Huitt), who does not believe Valjean can be reformed. Valjean aids a struggling working-class woman, Fantine (Rosie Barrack), by becoming a guardian to her child, who is poorly treated by her paid caregivers, the Thénardier’s (Tyler Hicks & Claire Doucet). The play progresses to the Paris student uprising of 1832, led by Enjolras (Ryan Singer), where a young Eponine (Mary Rose Vadeboncoeur) sacrifices everything for the love of a student revolutionary, Marius (Brice Cloke). Javert must confront his ideals after Valjean spares his life and saves Marius, who has captured the heart of Valjean’s adopted daughter, Cosette (Morgan Feeney Ingraham).

Poignant, epic and uplifting, Les Misérables illustrates the triumph of the human spirit. “Do You Hear The People Sing?”

This production is made possible with the generous support of the Tim Abbott Family & the Michael J. Slater Family.

Under Theatre Director, Nicole LaBella and Musical Director, Heather Luck, students in the Steele Canyon High School drama and music departments produce an annual Fall Semester play and an annual Spring Semester Musical. The Spring Production of The Sound of Music was named the Best High School Musical at the 2018 Broadway San Diego Awards after the first year of entering the competition that celebrates excellence in San Diego County’s high school musical theatre.