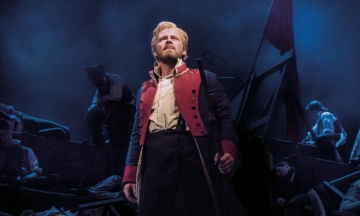 February 8, 2019 (Spring Valley) -- London stage actor, Dean Chisnall, will be visiting Steele Canyon Charter High School from March 7 through March 9 to help prepare the school’s theatre department for their own production of the award-winning hit, Les Misérables, premiering March 20th.  He will also be the main event in “Who Am I? An Evening with Dean Chisnall” benefit night for San Diego County theater students at Steele Canyon High School on the evening of Thursday, March 7 @ 7:00pm.  “I’m so excited and honoured to come to Steele Canyon - it’s a huge privilege to be invited to share my passion with such like minded students and staff. I’ll be there soon... See you on the barricade.” -Dean Chisnall

Dean Chisnall is originally from Lancashire, England, and a 2005 graduate from The Arts Educational School of Musical Theatre in London.  In addition to his current lead role as Jean Valjean in the London cast of Les Misérables, Chisnall’s West End and international theater credits include The Woman In White, Never Forget, Blood Brothers, Mama Mia!, Evita and La Cage aux Folles.

Steele Canyon music director Heather Luck befriended Dean Chisnall while on a trip to London last December.  Luck invited him to America to meet the students of the Steele Canyon Players so that he might offer them advice and tutelage as they get ready for their upcoming production of Les Misérables.  Chisnall accepted the invitation.  Along with Steele Canyon theater director, Nicole LaBella, Luck and Chisnall will team-up to instruct and inspire the young actors to capture the essence of some of most beloved characters ever created for musical theater.

Chisnall will be the guest of honor in the Steele Canyon Theatre on March 7, @ 7:00pm. In an informal evening, through a Q & A session, Chisnall will share his story, training, inspirations, give a sneak peak at his favorite roles, as well as share his wisdom for success in the industry. Tickets are $20 online/$25 door. Visit www.schscougars.org.

The Steele Canyon Players are rising stars in the local high school theater scene.  Under Theatre Director, Nicole LaBella and Musical Director, Heather Luck, students in the Steele Canyon High School drama and music departments produce an annual Fall Semester play and an annual Spring Semester Musical. The Spring Production of The Sound of Music was named the Best High School Musical at the 2018 Broadway San Diego Awards after the first year of entering the competition that celebrates excellence in high school musical theatre.

Steele Canyon Charter High School is a California charter high school located near the eastern San Diego County communities of Jamul, Rancho San Diego, and Spring Valley.  Opened in 2000, the school serves students in grades 9 through 12. Steele Canyon has operated as a charter school since July 1, 2007.