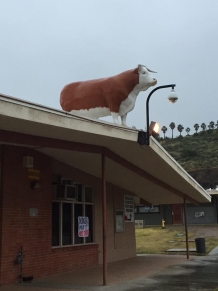 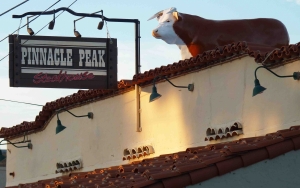 Fortunately the missing steer statue was found this morning not far away, standing on the roof of El Capitan High School—and that’s no bull.

No one has come forward to fess up to steering the statue to the high school, though a senior prank is rumored. 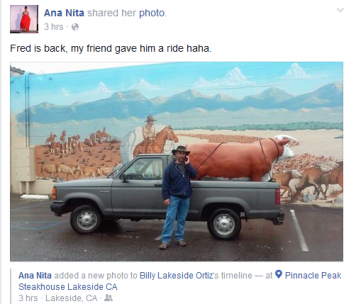 In fact, the lonely bull has gone missing before, former Pinnacle Peak manager Toni Petroro told our editor back when the steakhouse was at its former location in Santee.  Petroro said the wayward bull was actually stolen several times, usually as student pranks, but always found its way back home.

This time around, Lakeside resident and photographer Billy Ortiz took the bull by the horns and wrestled the life-sized steer statue dubbed “Fred” into his pickup truck. He hauled it back to its now-rightful owner, Rick Chiles, proprietor of the building that housed the now-closed steakhouse--but paused first for a photo opportunity in front of a cattle drive mural painted on a nearby building.

Milking this story for all it’s worth, we’d be remiss not to tell you about a second fiberglass cow named Betsy, located just across the street at the Lakeside Historical Society’s headquarters.

“The two have been gazing at each other across Maine Avenue for two years,” Ortiz quipped on his Facebook page while Fred the bull was missing. Later he surmised, “Lakeside is grateful Fred is back home.”