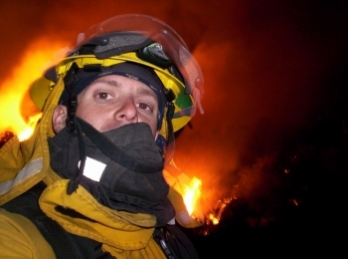 "Given the existing high-risk conditions that are projected to continue into the future, destructive firestorms will certainly occur again. Yet, even armed with this knowledge and after the Cedar Fire wake-up call, the San Diego region is woefully unprepared."

October will mark the first anniversary of the Witch Creek Fires and fifth anniversary of the deadlier Cedar Fire.  Four years have passed since voters overwhelmingly approved Proposition "C" which called for a Countywide Fire Department.  Yet  the County of San Diego is still at the nascent stage of organizing collective fire departments of the region into one unified command structure.

In the past two months, local politicians voted to ask voters to approve a $52 increase in their annual property taxes in order to fund such a unified fire command. On June 25, the Board of Supervisors voted unanimously to approve a consolidation of some of the counties twenty-three separate fire departments, while boasting that they had spent $3 million from the County’s General Fund and Community Development Block Grant funds to purchase eight four-wheel drive fire engines. County Supervisors will spend $15.5 million dollars annually to bring additional resources and firefighters to more than 50 existing fire stations throughout the region, unifying twelve agencies to merge through a  three-phased process.

"Over half the County will be unified into a single, less-fractured, more efficient agency. This means stronger and better coordinated services in our rural areas. And, it brings us significantly closer to our eventual goal of creating a Countywide fire entity to serve the region," said Jacob, who also stated in a previous announcement that purchase of the new fire trucks represented "proof positive of the County’s aggressive efforts to make our region the best prepared it can be for fire and other disasters."

Yet county fire officials and residents have been hearing promises from politicians for the last five years about unifying the departments, only to see little or no action. In August 2005, a plan was put forward by the San Diego Local Agency Formation Commission (LAFCO) to begin the process of reorganizing the region’s fire protection. LAFCO issued a scathing report in February 2005 which labeled the county’s emergency preparedness organization "bewildering" and "short-sighted."

"In the absence of compelling cooperative agreements or inclusive organizational structure, the region’s 28 autonomous agencies exist in an environment that results in isolated policy decisions impacting the effectiveness of region-wide service," stated the 2005 LAFCO report. In their report, LAFCO said the region’s agencies had not developed a universal response criterion, had not provided a unified command or employed unified standards for training safety personnel, and were not able to "engage in strategic regional planning that could eliminate redundancies" and engender more effective use of resources. "Because emergency services are divided among so many agencies—no single authority is accountable for creating and implementing a comprehensive vision for the region," stated the LAFCO report. "The determinations in this report underscore the fact that the region’s bewildering organization of un-served areas and redundant, under-funded public agencies did not evolve spontaneously; it was encouraged and given shape by short-sighted public policy choices that were adopted without a vision of how such decisions would impact public safety."

Fast forward three years later; the County Grand Jury report blasted the County’s continued lack of progress in creating what they term an "historically and currently failing" system to "provide the resources necessary to protect residents and visitors during significant firestorms."

"According to researchers, fire season has grown two months longer and destroys 6.5 times more land than in the 1970s," stated the Grand Jury. "In spite of Santa Ana conditions, insufficient rainfall, longer fire seasons and urban sprawl, the County remains without a unified fire protection agency and no central command. Assessments following the Cedar Fire and the Witch Creek/Guejito fire have consistently called for a better-organized and more responsive system in the unincorporated area where wildfire tends to originate."

During Lace’s 2005 study of the county’s fire preparedness, local fire department personnel severely criticized the Supervisors’ for their lack of commitment to fire protection.

San Marcos Fire Department Chief Larry Kinnard said the problem for county fire fighters was one of funding. He was joined by Lakeside Fire Chief Mark Baker, who also called for an increase in property tax revenues to pay for local fire services. Both men echoed blistering statements made by then-president of the San Diego Fire Chiefs Association Kevin Crawford, who in October 2004 said a chief culprit leading up to the lack of preparation for the Cedar Fire was "an atmosphere of inattention" on the part of the county towards the volunteer and smaller fire departments in San Diego’s backcountry. "Fire protection in San Diego County is like a large jigsaw puzzle. One of the missing pieces in this fire protection jigsaw puzzle has been the county’s lack of participation in the business of fire protection in the unincorporated areas," said Crawford. "It has been the opinion of the fire chiefs that this county believes fire protection in the rural areas is the responsibility of those who live in those areas and not the responsibility of the county.”

Under the plan voted on by the Supervisors on July 25, a "County Fire Warden" would take charge of all administrative responsibilities, while two "Fire Chiefs" would direct field operations. The plan calls for 12 agencies to merge in three phases, starting with six volunteer companies: Sunshine Summit, Intermountain, Ranchita, Shelter Valley, Ocotillo Wells and Dulzura. The Campo, Boulevard, San Pasqual and Mount Laguna fire agencies would be next to join while the Rural and Pine Valley fire protection districts would join in a final third phase. But as Jacob noted, the plan the Supervisors voted on must still be approved by LAFCO.

“They have no county-wide fire department, but they continue to build in the back country,” Allan told East County Magazine.  As a result, La Mesa and other local cities must send fire engines to fight wildfires outside city limits and pay to call up off-duty firefighters to staff city firehouses in case of local emergencies.

The County’s proposal for a $52-per-parcel fire assessment fee to create a Fire Authority would provide 13 new fire engines for the City of San Diego, but only six for the County--forcing cities to “subsidize the County for fire protection,” Allan added.

In addition, the plan would not take effect until July 2009.

“We could still have a fire this year,” he warned. “The County would put $15.1 million into this program.”  By contrast, the City of La Mesa’s spends nearly $8 million on its fire budget to protect just nine square miles. “The County’s priorities aren’t right,” Allan concluded.  “I definitely think they need to clean up their act.”

E.A. Barrera has been writing on politics, land use, arts and culture in San Diego since 1997. He has won six San Diego Press Club awards for Journalism in the last three years. He is a life-long resident of San Diego County. He is currently waiting for the Baltimore Orioles to break out of their 11-season slump and regain their former glory.