“If he did make it out of there, someone must have seen him or knows what happened to him, and we need them to call and tell us.” - Sgt. Don Parker, San Diego Sheriff Department

December 1, 2010 (San Diego’s East County) --The blue Jeep Grand Cherokee driven by 16-year-old Mickey James Guidry was found abandoned in the Anza Borrego desert two days after Thanksgiving. That was Thanksgiving a year ago. No one has reported seeing him since.

The disappearance of the San Marcos teen, which ECM previously reported on,  remains unsolved despite numerous searches by volunteers and the San Diego County Sheriff’s Department.

Sheriff’s Sgt. Don Parker, emergency services division search and rescue coordinator, headed up the most recent Anza Borrego search about two months ago. Nothing was spotted, he said. It was Sgt. Parker who in April was the last to find evidence in the case. On April 25th, during one of the search and rescue efforts, he located the Grand Cherokee’s vinyl spare tire cover. He described the location as being in dangerous, rocky terrain more than a mile from where the Jeep was found.

“Even in broad daylight, you have to watch where you put every step,” Sgt. Parker said. Further describing the area in which the tire cover was found, he added, “There are rocks the size of bowling balls and some as large as Volkswagens.” He added, “Every time we’ve gone out there, our search and rescue people have come back having been stuck with cactus needles.”

The search teams have covered several square miles of Anza Borrego in areas known as Pinyon Mountain trail, Pinyon Wash, Harper Flat and Harper Canyon, but “the only thing the additional searches have done is eliminate where he hadn’t gone,” Sgt. Parker said. He said that 40 to 50 square miles of desert or more remains to be searched. “Even in areas we’ve already searched, I’m not entirely sure he’s not there…If he’s still out there, if he’s still out there in the area of Pinyon Flat or Pinyon Wash, it would be very difficult to find him.”

But Sgt. Parker added, “If he did make it out of there, someone must have seen him or knows what happened to him, and we need them to call and tell us.” 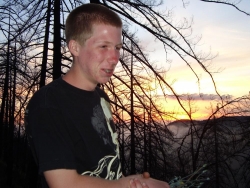 Sgt. Parker said he has four “open” cases that he’s working as the coordinator for search and rescue, but Guidry’s disappearance is the only one involving a juvenile. He further commented, “They vanish, but they’re not forgotten. People may think they’re forgotten, but they’re not.”

The investigation into Guidry’s disappearance was initially slowed by conflicting circumstances dating back a week prior when the teen erroneously reported being kidnapped to cover up damaging his father’s motorcycle. His mother, Missy Perucca, said that incident was out of character for her son and he didn’t realize the trouble he would cause by making up that story. 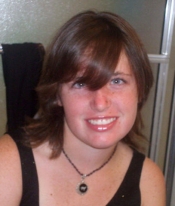 Maurice Dubois is one of the dozens of volunteers who participated in the desert searches for Guidry. Dubois is also the father of 14-year-old Amber Dubois of Escondido, whose body was found last March, a year after she went missing. In 2009, Dubois founded More Kids, an organization that spearheaded successful state legislation in recent months giving the community improved means for readily locating missing children. An underlying objective of that legislation is to prompt law enforcement to act more quickly and more effectively in missing juvenile cases.

Dubois said that “past case history shows that 70 to 80 percent (of missing children) are runaways” and that leads “law enforcement to believe that any teenager over the age of 13 is a runaway. We’re trying to prove them otherwise.”

But, Dubois doubts any of the legislation promoted by More Kids would have helped in the search for Guidry had they been in place at the time of his disappearance.

“Our laws would have had no effect on his situation,” Dubois said. The search for Mickey “was a very difficult situation mostly because of what happened to him weeks earlier,” he said, referring to the false kidnapping report. “When you have a child that’s cried ‘wolf’ in an attempt to cover up his own bad behavior, it absolutely, without a doubt affected how law enforcement responded.”

Dubois continued, “But, if you look at just the facts of his disappearance, where he broke down and the scenario at that time, we realize this was a 16-year-old kid that was in a lot of danger. The Anza Borrego desert is so big. It’s so dangerous out there. If you think where he broke down, 10 miles from nowhere, and try to figure out what his frame of mind was at the time, you realize the danger he faced.”

Juvenile investigations Detective Patrick Yates of the Sheriff’s San Marcos substation leads the investigation into Guidry’s disappearance. He’s been on the case since the beginning and, like Sgt. Parker, says it’s “open and active.” Just the same, though, he said, “Nothing has been learned about the possible whereabouts of Mickey Guidry. All investigative leads have been followed but none have been fruitful in helping to locate Mickey.”

In pursuit of uncovering Guidry’s whereabouts, Detective Yates said he’s in “regular contact” with the National Center for Missing and Exploited Children. Through the national center, law enforcement agencies throughout the country are kept updated on the status of Guidry’s disappearance, he said.

“The Sheriff’s Department has no reason to believe that Mickey has been the victim of foul play. Of course, we don’t know what has become of him so all possibilities have been considered,” Detective Yates said.

Guidry’s is one of seven cases assigned to Detective Yates. But it’s not like any of the others, he said.

“All of them are runaways but none of them are at-risk. Unlike Mickey’s case, none of them have suspicious circumstances related to them. “ Detective Yates further explained, “Mickey’s case is very different than that of most other missing juvenile cases. The overwhelming number of missing juvenile cases are due to the juvenile running away or being a victim of a family abduction usually at the hands of a parent and as part of a child custody case. Those types of cases are usually resolved in short order. If not, then law enforcement usually has a general idea as to where the juvenile is and with whom they are residing. With regards to Mickey’s case, we have no strong indication as to where he may be.”

Detective Yates said anyone that has information which may help in locating Guidry should call him at the Sheriff’s San Marcos substation. His direct phone number is 760-510-5233.

Guidry’s mother, Missy Perucca, is among those involved in the case with whom he keeps in regular contact, according to Detective Yates, but there’s been very little to be said in several months.

“It’s been a long year with no closure,” Perucca said. “We don’t seem any closer to finding him than we were a year ago – there have been no clues, no leads, no tips. Nobody has heard from Mickey. But, on the flip side, nothing has been found in the desert -- no clothing, no phone, etc., -- so that gives a small glimmer of hope that he may have gotten out of the desert. ”

Perucca said, “The main thing right now is to get Mickey’s face back into the media so that people will remember his story, see his face and maybe someone will remember seeing him,” and alert authorities.

My daughter who is a freshman at OU uses CampusWatchdog.com and it really has made me more comfortable knowing that I'll be notified if something were to go wrong so that I could take action. I think this site could aid in the loacting of Mickey Guidry if he were using it. It's run by the same company that also has MilitarySavior.com which my son who is currently deployed in Afghanistan uses.

I wanted to give you a heads up on the sites that both my son and daughter use. My son pre-records his videos from his computer and uploads them to the site. He then picks the date & time he wants each video to be sent to his children and wife. My daughter creates text messages to me and her mother that go off at certain times if she does not check in and disarm them.

I am writing you this because I believe other soldiers, students and families could benefit from this service and I believe they are giving it away for free and their is nothing more important than your child's safety.

God bless our children & our troops.