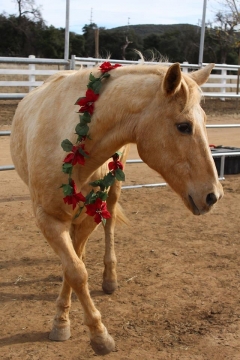 In mid-November, as we reported, two golf carts used to feed rescued horses were stolen from the facility in Guatay. But now one of those golf carts has been found on a property nearly five miles away and returned, thanks to an anonymous tipster.

A second stolen cart was also spotted at the same site, but was missing when authorities arrived, the Union-Tribune reports.

Fortunately, donations have helped Tir Na Nog replace the missing cart. In addition, two more carts have been donated to the sanctuary, which is home to well over a hundred animals—and recently added even more.

Founded in 2003, the facility takes in abused, abandoned and rescued animals from County Animal Services, providing a safe haven for equines and other animals in need.

To learn more about Tir Na Nog or donate to support the nonprofit’s animal rescue work, you can visit http://www.horsesoftirnanog.org/.