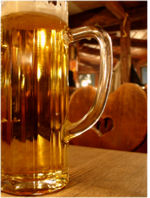 “This is our second beer pairing event with Stone Brewing and this year, it will be hosted by “Dr.” Bill Sysak from Stone Brewing Co.-Craft beer ambassador and certified cicerone,” said Chef Jeremy Manley. “We have carried Stone brews at our restaurant since the beginning almost five years ago before craft brews were delivered to Julian. We drove to Escondido a few times a month and picked up cases at the warehouse.” He added, "Halloween costumes will be worn by many of our guests and we will be handing out prizes for costumes.”

Award winning Stone Brewing Co. is a craft brewery headquartered in Escondido, California. Founded in 1996 by Greg Koch and Steve Wagner in San Marcos, California and is the largest brewery in Southern California.   As of 2010, it was the 14th largest craft brewery and 23rd largest overall brewery in the United States.

Chef Jeremy, age 25, is a featured chef who contributes recipes and is often a guest on Big Blend Magazine's radio show, Eat, Drink and be Merry and is highly recognized in both San Diego and Los Angeles areas, with publicized reviews in numerous publications including East County Magazine.

Since 2007, Jeremy’s on the Hill features California fresh cuisine with a menu that changes frequently in response to seasonal fresh produce and local organically grown produce as well as fresh seafood, organic pork, free range, organic grass fed beef and one of the finest wine and beer lists in East County.