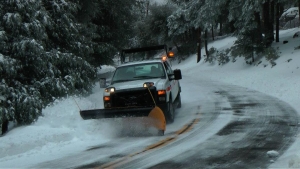 March 1, 2014 (San Diego) -- The storm that surged across our region Friday resulted in many accidents. California Highway Patrol reports 514 collisions during just 24 hours on Friday, far more than the normal 50 to 75 crashes on good weather days. Those statistics include San Diego County and Temecula to the north.  That included a multi-car crash on I-8 near Lake Jennings and a serious crash that briefly blocked Highway 67 near Slaughterhouse Canyon in Lakeside.

Across the county there were numerous reports of trees down and debris and flooding obstructing roadways, adding to motorists' woes.  Basketball-sized boulders were reported on  Skyline Truck Trail near Lyons Valley Road yesterday.  SDG&E also kept busy dealing with multiple power outages including one in Ramona, where several power poles were knocked down. DPW crews have also been working long hours clearing blocked roads and ploughing snow.

Outages were reported across the county, including these East County communities: Borrego Springs, Shelter Valley, Canebrake, Julian, Kentwood In The Pines and Banner.  Power is expected to be restored by Sunday in these areas.

In some areas, several inches of rain fell in a brief period, with more expected today. If traveling in mountain areas at higher elevations, be prepared for the possibility of chains required on snowy roads.  The County posts requirements for chains and other helpful information for drivers at www.Facebook.com/SDCountyDPW.