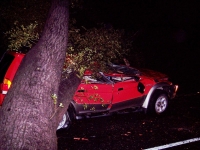 San Diego Gas & Electric crews worked through the night to restore service to customers after heavy rains and winds knocked out power to 92,000 SDG&E customers in 24 hours. By 11:30 a.m., power had been restored to all but 1,772. Hardest hit areas include communities in East County, the center city area, and Borrego Springs.

For updates on power outages, visit http://sdge.com/outages. You can also get outage updates on Twitter, @SDGE. SDG&E advises not to touch downed lines, which may be energized and dangerous. Freeing someone from energized power lines or equipment should be attempted only by a trained rescuer such as a firefighter, or by a qualified SDG&E employee.

The storm also caused numerous traffic accidents. In Fallbrook, two people were seriously injured in a head-on collision on Highway 76, shutting down a roadway. In Ramona, a 37-year-old woman was injured while driving south on Mussey Grade Road, when a large oak tree fell onto her SUV, Cal Fire reports. Fallen trees also blocked traffic on Conrad Street in Casa de Oro and on Greenfield Drive in El Cajon. Snow blanketed mountain areas.

In addition, four people were injured in Jamul, where a black Infinity vehicle struck a telephone pole on state Route 94 near Lyons Valley Road. The driver will face felony charges for driving under the influence, the Union-Tribune reported.